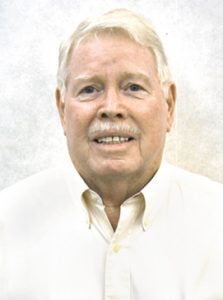 Guy Elvis Barriger, 82, of Taylorsville, died on Saturday, December 23, 2017, at his home, surrounded by his family.

Mr. Barriger was born on March 2, 1935, in Alexander County, the son of the late Shelby Guy Barriger and Grace Feimster Barriger Holleman.

Guy grew up in the town of Taylorsville and he often said those streets were his playground. When his mother was at work at the Five & Ten Cent store, Guy would often follow the delivery man, Mr. Harve Mayes, and holler wait for me, and that’s how Harve gave him the nick name of “Wait For Me”. Guy got an early start on good work ethics. At the age of 12, he delivered milk behind Mr. Bell’s horse and buggy. He would run the milk to the door and pick up the empty bottles, and hurry down the street to catch up with the horse as it continued its delivery route.

After he graduated from Taylorsville High School, he joined the United States Air Force, had top secret clearance for his job as a nuclear electronics technician and received a safety award for developing a safety shield for testing electronics equipment of nuclear war heads. He received an early discharge to attend college. He attended Mitchell Community College for two years, and he graduated from Lenoir-Rhyne College with a degree in Social Studies. He received his Master’s Degree in Drivers Education.

Guy began his teaching career as an Economics, Math, and US History teacher. His students, even today, told him how he made History come alive. Approximately 80% of the citizens of Alexander County have a story to tell while being a student driver with Mr. Barriger. He was selected by the NC State Department of Public Instruction to co-author a resource guide for Drivers Education. He served on the board of Southern Association Accreditation for Schools in the Western Piedmont Division. He completed his career in education as the Drivers Education Coordinator, and retired after 43 years.

Mr. Barriger believed in serving the community, which he did as a Lion Member, Chairman of Western Piedmont Council of Government, Town Council member, and later as the Mayor of Taylorsville. He served on this board for 25 years. Guy Barriger also received the honor of being presented the Order of the Long Leaf Pine by the Governor.

Guy Elvis Barriger married Linda Brookshire Barriger in 1955. They spent 62 years together. After retirement, they traveled to all 50 US States as well as a large part of Canada. Along with traveling, they enjoyed spending time with family and friends at North Myrtle Beach, golfing, dancing, and reading. Guy’s favorite author was Lewis Grizzard. As an avid golfer, Guy was one of the founding members of Brushy Mountain Golf Course.

Mr. Barriger was preceded in death by his parents and an older brother, Shelby Wilson Barriger.

Those left to cherish his memory and celebrate his life include his wife, Linda B Barriger; son, Bill Barriger and wife Jan; two granddaughters, Mandy B. Weisend and husband Brian, and Jessy Barriger; a great-granddaughter, Remi Weisend; a sister, Louise Holleman Sebastian; two brothers, John Holleman and wife Carol, and George Holleman; a brother-in-law, Glenn Brookshire and wife Judy; many nieces and nephews; as well as his close friend, F.P. Wright, who stood by Guy throughout his illness. Just recently Guy’s life included his caregiver, Cherri; and a faithful companion, Derrick.

A service to celebrate his life will be held at 1 p.m., Saturday, December 30, 2017, at Taylorsville Presbyterian Church, with full military honors accorded by DAV Chapters 84 and 6. Pastor Paul Sink will be officiating. The family will receive friends immediately following.

In lieu of flowers, memorials may be given to the Fellowship Hall Fund for the Taylorsville Presbyterian Church, PO Box 507, Taylorsville, NC 28681; or Catawba Regional Hospice, 3975 Robinson Rd, Newton, NC 28658.

Adams Funeral Home and Cremation Services is honored to be serving the Barriger Family.