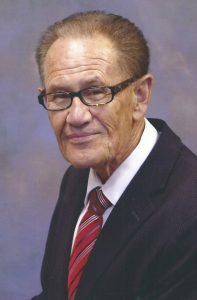 Mr. Hines was born in Alexander County, the son of the late Asa Hines and Vada Campbell Hines.

He was a US Army veteran, who had served after the Korean Conflict. Austin graduated from Hiddenite High School and also from Wingate College. He was a member of First Baptist Church of Taylorsville, where he served on the Deacon Board and was a former member of the choir. He was an avid Duke fan, and a loving father and grandfather.

Austin was a former President of Blackwelder Furniture, in Statesville, having been with the company for 32 years. While at Blackwelder’s, he was privileged to have the late Chief Justice Warren Burger along with a number of secret service people and Jack Ford with NBC news as his customers. Austin was a funeral assistant for Adams Funeral Home and also a stockholder. He will be greatly missed by all his fellow staff members.

Including his parents, he was preceded in death by his wife, Louise D. Hines, who he married February 24, 1980; a step-son, Randy Kirkman; and a brother-in-law, Ned Deal.

Those left to cherish his memory include two sons, Nathan Hines and wife Janet of Hiddenite, and David Hines and wife Angela of Statesville; five grandchildren, Chelsea and husband DJ of Taylorsville, Lily Hines of Hiddenite, Frankie and wife Mindy of Camp Lejeune, Jacob and wife Sara of Boone, and Anna of Statesville; two great-grandchildren, Cloe and Cameron Austin; sister, Nancy H. Sherrill and husband Jeep of Hiddenite; sister-in-law, Judy Deal of Taylorsville; brother and sister-in-law, Keith and Doris Russell; and a number of nieces and nephews.

The funeral service will be held at 3 p.m., Friday, January 12, 2017 at First Baptist Church in Taylorsville. Rev. Tony Daniels and Rev. Dan Redding will officiate. Burial will follow in the Taylorsville City Cemetery with full military honors accorded by DAV Chapter 84 and Chapter 6. The family will receive friends from 1-2:30 p.m. prior to the service. The body will lie-in-state from 4-6 p.m., Thursday, January 11, 2018 at Adams Funeral Home.

Adams Funeral Home and Cremation Services is honored to be serving the Hines Family.