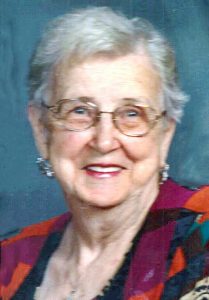 Mrs. Stafford was born April 8, 1929, the daughter of the late Willie Tallent and Elsie Hoyle Tallent.

She had worked as a seamstress and was a faithful member of Millersville Baptist Church. She was a member of DAV Chapter 84 Auxiliary, was a wonderful cook, and liked to garden. She had four children that served our country.

Including her parents, she was preceded in death by her husband, John Raven Stafford; a daughter, Judy Ellen Huffman Wilderdyke; a son, Tony Allen Huffman; four sisters; and two brothers.

The funeral service will be held at 11 a.m., Saturday, January 13, 2018 at Millersville Baptist Church. Rev. Bill Orren will officiate. The body will lie-in-state 30 minutes prior to the service. Burial will follow in the church cemetery. The family will receive friends from 6-8 p.m., Friday, January 12, 2018 at Adams Funeral Home.