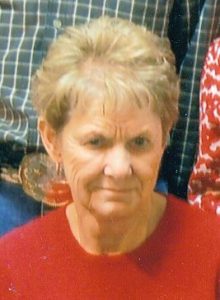 Judy Mae Jolly Harrington, 76, of Taylorsville, departed to her heavenly home on Tuesday, January 9, 2018, at her residence, surrounded by her family.

She came into this world on February 19, 1941, the daughter of the late Haskel and Willa Mae James Jolly. During her career, Judy worked as an Insurance and Billing Clerk for Medical Center Pharmacy in Hickory and for Alexander County Hospital.

She was a member at Three Forks Baptist Church and regularly attended Poplar Springs Baptist Church. She loved sewing, flowers, and traveling to Pigeon Forge. Judy had such a love for her family and was an excellent cook. She truly was a jewel that will be missed, but will forever be in our hearts.

In addition to her parents, she was preceded in death by her husband of 58 years, William Harrington; sister, Penny Kohnle; and an infant brother.

The family would like to say a special thank you to Hospice of Alexander for all the care and support that they have provided during this time.

The family will receive friends on Saturday, January 13, 2018, from 1:30 p.m. – 3:00 p.m., at Poplar Springs Baptist Church, and the service will follow, at 3:00 p.m., with Rev. Allen Fox and Rev. Phil Chapman officiating. Burial will follow at Three Forks Baptist Church Cemetery.