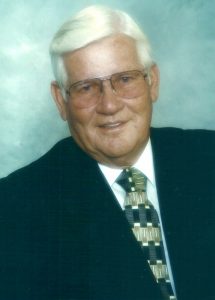 Herman Daniel Shook, 85, of County Home Road, Taylorsville, went to be with our Lord and Savior on Friday, January 12, 2018 at Catawba Valley Medical Center.

He was surrounded by his family, who remained by his side until his passing.

He was born June 26, 1932, in Alexander County, the son of the late Robert Glenn Shook and Burbie Hefner Shook. Herman was an upholsterer in his younger years, and founded Taylor King Furniture in 1974, which he later sold in 1991. His daughters remain there today to carry on his legacy.

He was a member of St. John’s Lutheran Church, and also attended Reformation Lutheran Church until his health declined. He loved to take care of his yard, and also loved NASCAR. He had been in declining health for a number of years, and fought a mighty battle.

He was preceded in death by his parents, Glenn and Burbie Shook; brothers, Marvin, Conley, and Harvey; sister, Betty Chapman; and his beloved daughter, Debbie.

He is survived by his loving wife of 66 years, Rachel; daughters, Tanya Comer and husband Gary, and Dana Beach; grandchildren, Courtney Kite Osteen and husband Kyle, Garrison Comer and fiancée Allison, Teresa Herman and husband Kevin, and Mindy Comer; great-grandchildren, Avery Herman, Anna Herman, Luke Street, and Carsyn and Cooper Osteen; sisters, Pauline Fox of Charlotte, Martha Kirby, and Carolyn Sigmon and husband Cloyd of Taylorsville; brothers, Gene, Jimmy and wife Janice, and Steve of Taylorsville; sister-in-law, Juanita Shook of Hickory; and a number of nieces and nephews. Also surviving are the ones he considered his other daughters, Jennifer Little, Mitzi Poovey, and Vicki Shook Goble.

In lieu of flowers, memorials may be made to Reformation Lutheran Church, 443 West Main Ave., Taylorsville, NC 28681.

Adams Funeral Home and Cremation Services is honored to be serving the Shook Family.