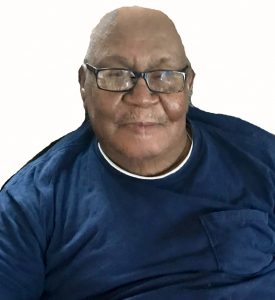 Ray Daniel Howell, 83, of Lewittes Road, Taylorsville, went home to be with his Lord and Savior on Friday, January 12, 2018 at Iredell Memorial Hospital.

He retired from General Electric in Hickory, and also, in his later years, was a greeter at Wal-mart.  He was a member of Macedonia Baptist Church and a former member of St. John Baptist Church.  Ray was an avid Tar Heels fan. He enjoyed the outdoors and was a loving and devoted, husband, father, grandfather, and great-grandfather.

Including his parents, he was preceded in death by sisters, Hazel French, Evelyn Gabay, Cynthia Grant, and Esterlean Howell; and brothers, Issac Lee, Rueben and Gerald Howell.

The Home-going service will be held at 1 p.m., Tuesday, January 16, 2018 at Adams Funeral Home Chapel.  Rev. Terry Hunt and Rev. Fredrick Howell will be officiating. Burial will follow in the Macedonia Baptist Church Cemetery. The family will receive friends one hour prior to the service.

The family would like to express a special thank you to Fresenius Medical Care and to Iredell Memorial Hospital Staff for all the care you had shown Mr. Howell.

Adams Funeral Home and Cremation Services is honored to be serving the Howell Family.