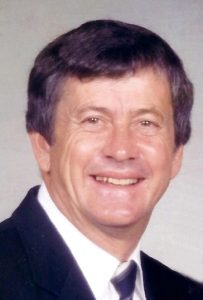 He was born December 2, 1936, in Alexander County, son of the late Ransom Vance Payne and Pearl Warren Payne.

Roger was preceded in death by a brother, Christy Payne; and a sister, Peggy Payne.

He was employed by Mountaire Farms of Statesville and was a tobacco farmer. He was a member of Fairview Baptist Church, where he had served as Treasurer and Sunday School Superintendent.

Roger was a former member of Hiddenite Fire Department, Corvette Club, and former Alexander County School Board Member. He served in the U.S. Army from 1960 until 1962.

Funeral services will be conducted at 3:00 p.m., Saturday, January 20, 2018, at Fairview Baptist Church, 41 Center Church Rd, Hiddenite, NC 28636. Rev. Durant Barr and Rev. Ruel Fox will officiate. The family will receive friends from 1:00 p.m. until 3:00 p.m., prior to the service at the church. Burial will be in Fairview Baptist Church Cemetery.

Condolences may be e-mailed to the Payne Family by visiting our website at www.chapmanfuneralhome.com.