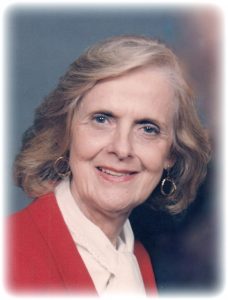 She did not lose the battle, but won her reward after a courageous forty year battle with MS. Her strong will and faith in her Lord and Savior Jesus Christ kept her going through the years.

She was born on July 30, 1933, the daughter of the late Clarence and Lacey Anderson Kerley. When she was able to work, she worked as a sales clerk for Peoples Drug and Town & Country Drug Store.

Frances was a member at East Taylorsville Baptist Church and was a loving mother, grandmother, sister, and friend to all. She was truly a jewel in this world that will be missed but will forever be in our hearts.

In addition to her parents, she was preceded in death by her husband of 62 years, Clifton RV “Bill” Douglas; sisters, Maragret Harrington and Shirley Campbell; and brother, James Kerley.

The family will receive friends on Wednesday, January 24, 2018, from 2:00 p.m. – 4:00 p.m., at East Taylorsville Baptist Church, and the funeral service will follow at 4:00 p.m. with Rev. Jamie Steele officiating. Inurnment will be with the family.