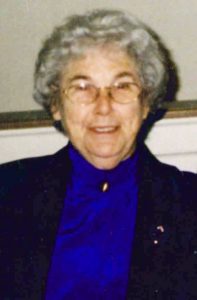 Funeral services will be held at 3:00 p.m., Sunday, January 21, 2018, at Walnut Grove Baptist Church in Moravian Falls, with Rev. Tim Henderson officiating. Burial will be in the church cemetery. The family will receive friends from 2:00 until 3:00 p.m., at the church, prior to the service.

Mrs. Minton was born August 28, 1926, in Wilkes County, daughter of Charlie and Clara Laws Kilby. She had worked in the cafeteria at Wilkes Central High School and was a homemaker. Mrs. Minton was a member of Walnut Grove Baptist Church.

She was preceded in death by her parents and her husband, Bill Harding Minton.