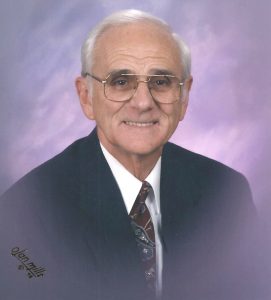 James “Jim” Plato McCurry, 86, of Leroy Road, Taylorsville, went to be with our Lord and Savior on Thursday, January 25, 2018, at Trinity Village, in Hickory. He was surrounded by all of his loving family during his passing.

Jim served in the US Army as a Military Police, stationed in Fairfax, Virginia. He was a Plant Manager of Lewittes Furniture for 35 years. He then was Supervisor for Ideal Frame for many years, until he retired.

Jim enjoyed motorcycles, NASCAR, and spending time with his family. He had a contagious smile that warmed many hearts. He was a member of Millersville Baptist Church, where he attended until he no longer could. He loved his church and sharing what the Lord had done for him over the years.

He was so proud of his big family of girls, four daughters and seven granddaughters; also there was the apple of his eye, his grandson. He had been declining in health for the past several years, and fought the battle of Parkinson’s Disease.

He was preceded in death by his parents, Brian and Nora McCurry; brothers, Johnny and Lee; sisters, Ruby, Jean, and Blanche; a son-in-law, Steve Walker; and a great-granddaughter, Hallie Matney.

Special thanks to Trinity Village and staff of Hickory, and Hospice and Palliative Care of Catawba County for taking such good care of Jim.

The family will receive friends from 1:30-3:15 p.m., Monday, January 29, 2018 with the funeral to follow at Millersville Baptist Church at 3:30 p.m. Rev. Bill Orren will officiate. Burial will be at Millersville Baptist Church Cemetery, with full military honors accorded by DAV Chapter 84 and Chapter 6. Also, the family will gather at the home of Pam Branton, 15 Strawberry Lane, Taylorsville, NC 28681.

In lieu of flowers, memorials may be made to: Millersville Baptist Church, 130 Millersville Road, Taylorsville, NC 28681.

Adams Funeral Home and Cremation Services is honored to be serving the McCurry Family.