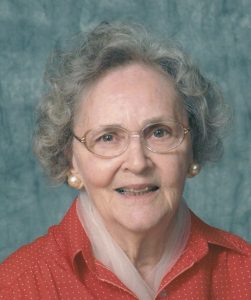 She was born on January 25, 1926, in Alexander County, daughter of the late Ramey L. Mitchell and Mamie Millsaps Mitchell. Mrs. Walsh was a graduate of Hiddenite High School and Mitchell Women’s College, where she played on the basketball team.

Prior to her retirement, she was employed with Evans-Eller & Associates. She was a member of Christ Boulevard UMC and while her health allowed, she served on the administration board and also taught Sunday School.

In addition to her husband and parents, she was preceded in death by a son, Stephen Walsh.

Left to cherish her memory is her son, Jeff Walsh of Statesville; a granddaughter, Julia Victoria Steffen (Jamie) of Shallotte; a great-granddaughter, Amelia Carolyn Steffen of Shallotte; two brothers, R.L. Mitchell (Camilla) of Stony Point, and Solon Mitchell of Hiddenite; two sisters, Hilda M. Hayes of Lexington, and Rebecca M. Burke (Alvin) of Taylorsville; and a number of nieces and nephews.

Funeral services for Louise Walsh will be conducted at 3:00 p.m., Sunday, February 4, 2018, at Christ Boulevard UMC, with Rev. Larry Thompson and Rev. Richard Mitchell officiating. Burial will follow in the Oakwood Cemetery. The family will visit with friends from 1:00 until 3:00 p.m. at the church.

Online condolences can be made to the family at www.nicholsonfunerals.com and Nicholson Funeral Home is serving the family of Louise Walsh.