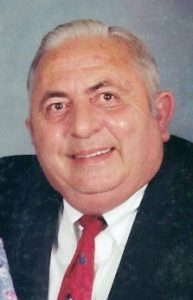 Rev. Billy Shaw “Bill” Chapman, 83, of Stony Point, passed away Tuesday, January 30, 2018, at his residence, surrounded by his loving family, after a lengthy illness.

Bill was born on July 6, 1934, in Alexander County, son of the late David Earl “Ted” and Emma Lou Dagenhart Chapman. He was retired from J.C. Steel Company as a professional truck driver. Bill was a member of Tabernacle Baptist Church, Lippard Farm Road, Statesville, and was a veteran of the United States Army, serving from 1954-1956.

In addition to his parents, he was preceded in death by two brothers, Thomas Claude “Bun” Chapman and Phillip “Phil” Chapman; and a sister, Milford Ruth Chapman White.

A funeral service will be conducted at 2:00 p.m., Friday, February 2, 2018, at Tabernacle Baptist Church, 494 Lippard Farm Road, Statesville, with Rev. Curtis White and Rev. Otis Johnson officiating. The family will receive friends from 1-2 p.m., prior to the service, in the church sanctuary. Burial will follow the funeral service at Stony Point Cemetery, with military honors.

In lieu of flowers, donations may be made to Hospice and Palliative Care of Iredell, 2347 Simonton Road, Statesville, NC 28625.