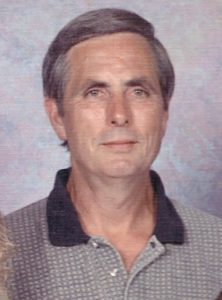 He was born October 3, 1954, in Alexander County, son of the late Rev. Billy Shaw Chapman and Phyllis Ann Robinson Chapman of Stony Point. Danny was a graduate of North Iredell High School and attended Mitchell Community College. Danny served in the United States Army. He was an upholsterer for Mitchell-Gold +Bob Williams.

In addition to his mother, he is survived by his wife, Diane Earp Chapman of the home; two sons, David Shaw Chapman of Stony Point, and Daniel and wife Dedra of Statesville; five grandchildren, Mallory, Austin, Bryson, Payton and Paislyn Chapman; and three sisters, Linda Rector of Hiddenite, Karen Dudley of Statesville, and Sandy Moose of Stony Point.

A memorial service will be conducted at 7:00 p.m., Monday, February 5, 2018 at the Chapman Funeral Home Chapel. Rev. Conley Matlock will officiate. The family will receive friends from 5:00- 7:00 p.m., prior to the service. At other times, the family will gather at the home of Daniel and Dedra Chapman, 137 Gemstone Drive, in Statesville.

In lieu of flowers, donations may be made to Chapman Funeral Home, 158 Stony Point School Road, Stony Point, NC 28678.