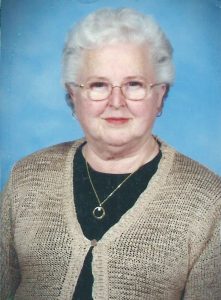 Mrs. Gilreath was born May 27, 1932, in Alexander County, the daughter of the late Robert Gilbert Sprinkle and Lillian Cook Sprinkle.

Loretta graduated from Hiddenite – Class of 1950. She was a homemaker and also a farmer of tobacco, dairy, and molasses. She was a lifelong member at Fairview Baptist Church, where she taught Sunday school, sang in the choir and with different groups of the church, and was also the custodian of the church. In earlier days, she enjoyed quilting and macramé. She loved to read inspirational romance books, her Bible, and study her Sunday school lessons.

In addition to her parents, she was preceded in death by her husband, whom she married in 1951, James “Jim” Gilreath; an infant daughter; and a brother, Bobby Sprinkle.

Those left to cherish her memory include her daughter, Deana Gilreath Adams and husband Henry of Hiddenite; a sister, Irene Sprinkle Herman and husband Lewis of Taylorsville; a sister-in-law, Sylvia Sprinkle Feimster of Taylorsville; numerous nieces and nephews; and a special niece and second “daughter”, Susan Sprinkle McLain. She shared a special love for all the Gilreath Family.

The funeral service will be held at 3:30 p.m., Friday, February 9, 2018 at Fairview Baptist Church. Rev. Durant Barr and Rev. Jeff Chapman will officiate. Burial will follow in the church cemetery. The family will receive friends from 2 – 3:15 p.m., prior to the service.

Memorials may be made to: Hospice and Palliative Care of Iredell County, 2347 Simonton Road, Statesville, NC 28625.

Adams Funeral Home and Cremation Services is honored to be serving the Gilreath Family.