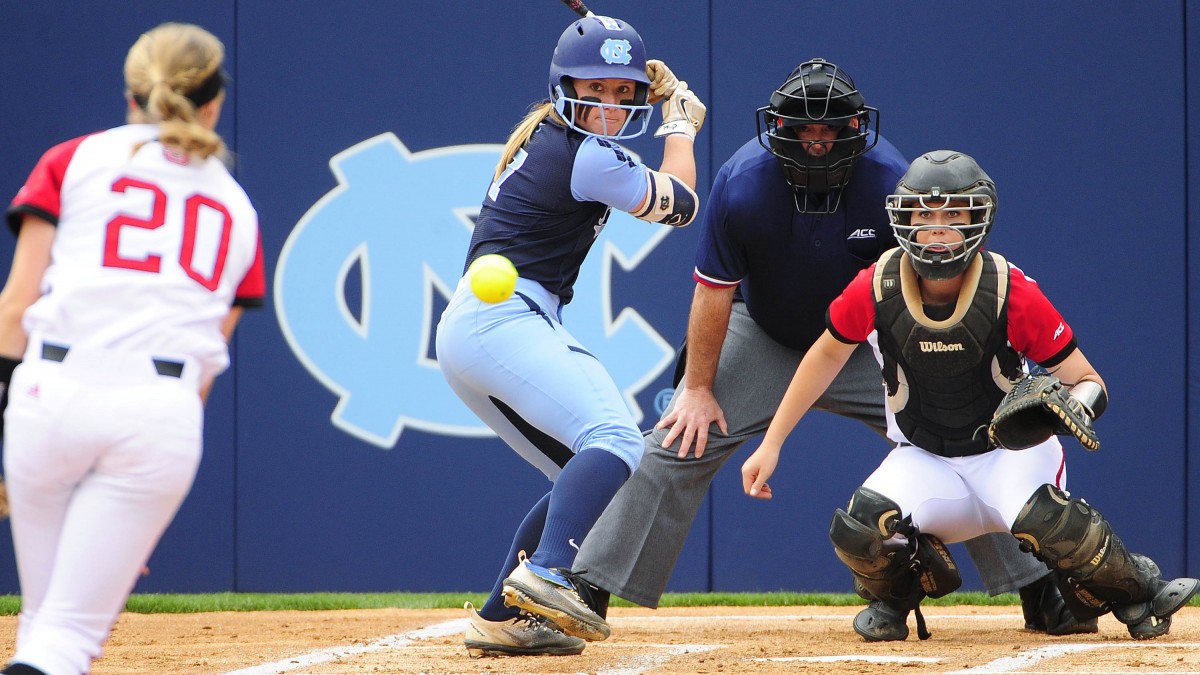 By D.N. PENNELL, Jr.
Three years into her college softball career, Hiddenite native Taylor Wike has put up statistics that put her among some of the best players to ever play the sport at the University of North Carolina at Chapel Hill.
A three-year starter for the Lady Tarheels, Wike has started all but one game in her career on the Carolina diamond. She has made 169 starts over her first three seasons, missing just one game her sophomore season.
During that time, Wike has been one of the most dependable bats for Coach Donna Papa’s Lady Tarheels team. She has a career batting average of .355 in 507 career at-bats, with 36 doubles and 18 homers. 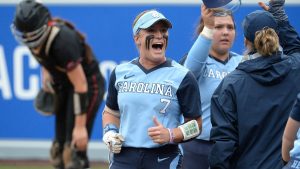 Through just three seasons, her name is already etched throughout the record book, sitting in the top 10 at UNC in career batting average (.355), on base percentage (.469), runs (144), doubles (36), hit by pitch (17), walks (97), assists (353) and double plays turned (39). Taylor currently holds the best on-base and stolen bases percentages in program history and needs just four double plays, nine walks, 37 runs, and 81 assists as a senior to reach each career mark.
Last season, Wike, who is the daughter of Mary and Burpee Wike of Hiddenite,    became the ninth Tar Heel to earn All-ACC honors three or more times in her career. After two seasons at second base, Wike made the move over to shortstop, where she started every game of 2017.
In addition to making All-ACC for the third time in 2017, Wike earned NFCA All-Southeast Region Third Team honors and grabbed a spot on the ACC All-Academic Team.
Prior to 2017, she was voted First-Team All ACC after her freshman season in 2015 and Second-Team all league in 2016. She was garnered ACC All-Tournament Team honors in 2016 and was one of 25 finalists for the NFCA National Freshman of the Year in 2015. During her productive freshman season in Chapel Hill, Wike was the team’s leading hitter with a .418 batting average. She blasted seven dingers, including a huge grand slam in a win over Notre Dame in April, 2015.
““Taylor started off here as a second baseman and I think she’s one of the best second basemen in this region, but based on our personnel needs we had to put her at short when Kristen Brown graduated and she’s done a great job there. She has great range going for balls, she’s a very gritty player and she’s going to get the job done. She’s maybe not your stereotypical shortstop but she’s very talented. She’s a tough out at the plate and she’s got a great eye. I think she’s going to have a great year this year. She’s swinging the bat very well and is very solid defensively – she’s our anchor in the infield. She can pull it all together for us.,” North Carolina Softball Coach Donna Papa commented.
“I’m excited for her heading into her senior year. I’ve known her for a long time – we started talking to her when she was a freshman in high school. I feel like I’ve grown up with her. It’s really fun to see how a player evolves from their freshman year to their senior year. I think she’s become  a little more vocal as a leader – she’s willing to step up and say some things she might not have said the past few years. She leads us at the plate and has a good presence and good confidence,” the longtime UNC Coach added.

Before traveling east to UNC, Wike became one of the best softball players in North Carolina during her four-year playing career at Alexander Central High School. Playing for Coach Monte Sherrill, Taylor started all four seasons at ACHS and was a member of three 4A State Championship teams in 2011, 2013, and 2014. As a senior, Wike hit .639 with a state record 64  while leading her team to a state championship. She also shined in basketball for Coach Matt Taylor while at ACHS and was voted the Taylorsvilletimes.Com Female Athlete of the Year in 2014.
As Wike and the Lady Heels prepare for the 2018 season opener this coming weekend in the UCF “Friends of Jaclyn” Invitational in Longwood, Florida, she took time to answer a few questions from the Times.
TIMES: It’s hard to believe you are entering your senior season at Chapel Hill. What do you expect from your final season in a Tar Heel uniform and what are your individual and team expectations for the year?

WIKE: Knowing I am going into my final year in a Tar Heel uniform has been emotional. I have high expectations this season for both myself along with the team. As a team, we came so close to an ACC Tournament championship last year so that is at the top of the list. Our goal is to win the ACC Championship and have the opportunity to compete for the WCWS. For myself, I have some personal goals that I like to keep to myself but one of my main goals is to have the most fun playing the game in my final season as a Tar Heel.
TIMES: Looking back on your career at Carolina…what do you think you will remember most about your time as a Tar Heel on and off the diamond?

WIKE: The thing I will remember most off the field will be the relationships I have created with my teammates. I have made friends that will last a lifetime and have been around some of the best people I could ever meet. On the field, it’s hard to pinpoint one moment in particular but playing on ESPN in the ACC Championship at our home field definitely will not be forgotten!
TIMES: You have been named All-ACC three times, placing you in rare company…What does an honor like that mean to you?
WIKE: Being named to the All-ACC team three times has been an honor. The caliber of players in the ACC are some of the best in the country so to be recognized with some of the best for three years in a row is something I have been truly thankful for!
TIMES: We all know you were a decorated player at Alexander Central before heading east to Chapel Hill…did playing for a high profile program like Alexander Central help prepare you for the big stage that is ACC softball?
WIKE: I definitely think playing at a high profile program helped prepare me along with traveling all over the country during my summers in high school to play some of the top competition. These two combined helped prepare me to play in the ACC.
TIMES: What would you say to a young player in Alexander County that is watching you on TV and hoping to follow in your footsteps as a college softball standout?
WIKE: To a young player hoping to follow in my footsteps, I would say to work hard and never let anyone tell you that you can’t do something. People are going to tell you you’re too small, not fast enough, etc… They’re wrong. If you believe in yourself and work hard enough, you can achieve what you want to achieve.
TIMES: Is there anything you want to say to the hundreds of fans in Alexander and surrounding counties that have followed and supported you since the youth travel tournaments until today?
WIKE: To the fans that have supported me since the beginning, I would like to say thank you. Thank you for supporting me through the ups and the downs of my career. I wouldn’t be where I am today without a lot of the people who have supported me since the beginning. I hope I have made you all proud. Mom and Dad, your support has meant the world to me and I can’t thank you enough for all the hours you put in to get me where I am today. I love you both.
TIMES: What are your future plans after UNC softball and graduation?
WIKE: After graduation, I plan to go into coaching and continue my education in Sport Administration. I don’t have a set plan yet, but I am looking into different options.
To follow Taylor and the Tarheels this season, go online at www.goheels.com or on Twitter @UNCsoftball.