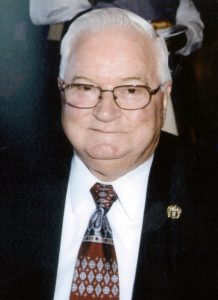 Born July 15, 1935 in Vale, he was the son of the late Marvin Odell Blackwood and Nellie Hoyle Blackwood.

In addition to his parents, he was preceded in death by his son, Dale Lewis Blackwood, and his brother, Ray Blackwood.

Lewis was a member of the last graduating class of 1953 from Banoak High School. Following graduation, he joined the U.S. Air Force and proudly served his country nearly 21 years before retiring as Technical Sergeant. Those years in service he noted as some of the most wonderful years in his life.

Following his service, he returned home to Hickory, where his parents and brother lived. He was employed as a manager of Fresh Air Market while attending CVCC, where he obtained an Associate Degree in Applied Science in 1982. He then went on to work for nearly 20 years as the Traffic and Transportation Manager of Stanford Furniture Company in Claremont. During these years, he was also working part-time for Bass-Smith Funeral Home in Hickory.

Mr. Blackwood loved all sports and especially NASCAR racing. He and Johnsie enjoyed spending time with family members and going on cruises.

He is survived by his loving wife of 42 years, Johnsie Daves Blackwood of the home; two sons, Dr. and Mrs. L. Berk Smith of Hickory, and Kevin W. Smith of Claremont; two granddaughters, Adrienne Hadleigh Smith and Kaitlin Ashleigh Elise Smith, both of Hickory; a grandson, Dylan Berkley Smith of Hickory; and his canine kids, Scooter and Mandy of the home.

The service will be held at 11:00 a.m. on Friday, February 16, 2018 in the chapel at Bass-Smith Funeral Home with Rev. Dr. R. Paul Kercher officiating. Entombment will follow in Woodlawn Memorial Gardens Mausoleum with full military rites. The family will receive friends prior to the service, from 9:30 to 11:00 a.m., at the funeral home.

In lieu of flowers, memorials may be made in his honor to the Humane Society of Catawba County, PO Box 63, Hickory, NC 28603.

Bass-Smith Funeral Home in Hickory is serving the family of Lewis C. Blackwood and on-line condolences may be sent to www.bass-smithfuneralhome.com.