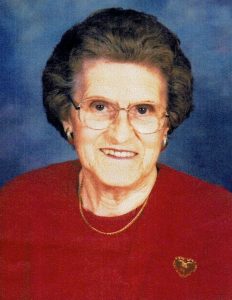 Dorothy Warren Hammer, 92, of Taylorsville, left this world for her heavenly home on Saturday, February 17, 2018 at her residence.

She was born on October 18, 1925, the daughter of the late David and Maggie Stafford Warren. During her life, she worked in the textile industry and then later had the pleasure of staying home and being a housewife.

She had such a love for her family and those around her. Dorothy was a member at Calvary Baptist Church, where she was a choir member, lead singer for Calvary quartet for a number of years, and was also a former Sunday School teacher.

In lieu of flowers, memorials may be sent to Calvary Baptist Church Building Fund at 550 5th Ave. SW, Taylorsville, NC 28681.

The family would like to give a special thanks to the wonderful caregivers who so faithfully cared for her: Connie Stillwell, Sharon Greathouse, Alice Johnson, Sherry Hammer, and Rowena Childers. They would also like to express their appreciation to Catawba Hospice, and especially to Nurse Cherri and CNA Shuya.