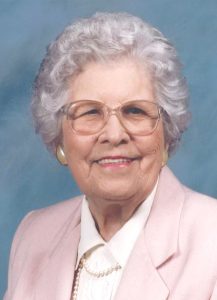 Born in Alexander County on September 7, 1917, she was the daughter of the late E.L. and Carrie Thomas Bebber.

In addition to her parents, she was preceded in death by her husband of 35 years, Hugh F. Johnson, in 1977; four brothers, Charlie R. Bebber, Lindsay B. Bebber, Ned W. Bebber, and John L. Bebber; and four sisters, Elsie Bebber, Blanche B. Canup, Cecil B. Canup, and Hazel B. Watts.

She moved to Kannapolis shortly after graduating from Taylorsville High School, marrying her husband Hugh in 1942. She retired from the Packaging Supply Department of Cannon Mills. She was a member of North Kannapolis Baptist Church, where she worked in the Beginner Department in her earlier years.

Funeral services will be conducted at Whitley’s Funeral Home Main Chapel on Sunday, February 25, 2018, at 4:00 p.m., officiated by Rev. Chris O’Guin. The family will receive friends prior to the service from 2:30 p.m. to 4:00 p.m. Interment will follow in Carolina Memorial Park, Kannapolis.

Mrs. Johnson had an unusual way of touching the hearts of all who knew or met her. She moved softly upon this earth and was a gentle soul with a giving spirit who loved people. She made friends easily and endeared herself to them quickly with her smile and gentle touch. She deeply loved her children, grandchildren, and great- grandchildren and was equally loved by them.

Online condolences may be sent to www.whitleysfuneralhome.com.