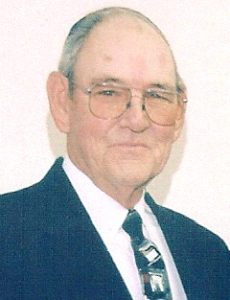 York was born August 27, 1930, in Alexander County, son of the late James Otis and Mary Hessie York Rufty. He was a retired farmer and tool and die maker at Hunt Manufacturing.

He was a member at Stony Point United Methodist Church and a graduate of Stony Point High School. York served in the United States Air Force during the Korean War. He was also a former member of the Traphill Saddle Club.

He was predeceased by his wife, Lucille Stikeleather Rufty, in September of 2017; and a sister, Berdena Rufty Gibson, in June of 2017.

A funeral service will be conducted on Monday, February 26, 2018, at 2:00 p.m., at Stony Point UMC, 311 Ruritan Park Road, Stony Point. Rev. Donnie Durham and Rev. Doug Hochmuth will officiate. Burial will follow in the Stony Point Cemetery. The family will receive friends from 1:00-2:00 p.m., prior to the service, in the multipurpose building of the church.

Condolences may be e-mailed to the Rufty Family by visiting our website at www.chapmanfuneralhome.com.

Chapman Funeral Home is assisting the family of York Rufty.