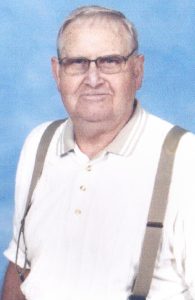 Alexander “Gorden” Martin, 90, of Taylorsville, left this world for his heavenly home on Saturday, February 24, 2018 to forever be with his Lord and Savior.

He was born on September 19, 1927, in Alexander County, the son of the late Lee and Bessie Deal Martin. During his career, Gorden worked for the School System as a Math Teacher at Alexander Central High School. He had such a love for serving, especially in the ministry of telling others about the Lord, leading him to be one of the first advisors in starting the Bible Club at ACHS.

Gorden was a member at White Plains Baptist Church and loved going to the Taylorsville Camp Meetings. He was also involved in The Gideons International Ministry and enjoyed gardening. Gorden was a wonderful father, grandfather, brother, and friend who will truly be missed but forever in our hearts.

Those left to cherish his memory include his sons, David Martin and Philip Martin and wife Karen, both of Taylorsville; daughters, Julie Martin of Zebulon, and Alice Bodensiek and late husband Erich of West Palm Beach, Florida; grandchildren, Adam and Simon Alexander, Christina and Christopher Bodensiek, and Abigail Martin; sister, Edna Mae Overcash of Shelby; brother, J.D. Martin of Cary; stepchildren, Matthew Elder of Statesville, and Rose Marie Wyatt of Troutman; and a number of nieces and nephews.

The family will receive friends on Saturday, March 3, 2018, from 2:00 p.m. – 3:30 p.m., at White Plains Baptist Church. The funeral service will follow at 3:30 p.m., with Rev. Tony Daniels officiating. Burial will follow in the church cemetery.

Condolences may be sent to Alexander Funeral and Cremation Service.