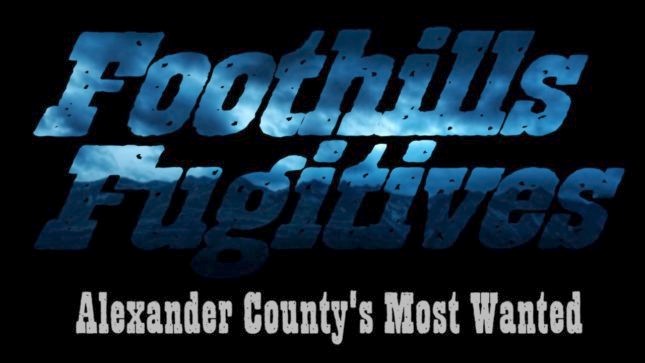 Alexander County Sheriff Chris Bowman has started a new program to help bring people with outstanding warrants to justice. The program, titled “Foothills Fugitives,” features a monthly video showing the photos and information about select individuals who have outstanding arrest warrants and either live in, or have ties to, Alexander County. The new video series came about after discussion with the Alexander County Crime Stopper’s board of directors.

“I was looking for a way to help increase the chances of getting some of our old warrants served on people who are typically hard to find. I saw a similar video produced by Buncombe County and thought it would be a great tool for our office as well. The idea was pitched to the Crime Stoppers board and they loved it,” stated Sheriff Bowman.

“It’s a great tool for our office and it allows citizens to get involved with solving crimes without putting their name out there,” stated Sheriff Bowman, referencing the anonymity offered to callers and tipsters.

There are two ways that people can submit their tip information; online and by telephone. Alexander County Crime Stoppers maintains a 24 hour Tip Line that can be reached by calling (828) 632-8555. Tipsters may also submit information online by visiting the Alexander County Sheriff’s Office website at AlexanderSheriff.org and clicking on the “Tipsoft” logo.

Where to Watch “Foothills Fugitives”

The inaugural episode of “Foothills Fugitives” will air on the Alexander County Government Channel beginning March 1, 2018, which can be viewed on Spectrum channel 192 in Alexander County and AT&T U-verse channel 99 in Alexander and surrounding counties. The videos will also be featured on the Crime Stoppers and Sheriff’s Office Facebook pages (links provided at the end of this article). Please note that the content and charge information regarding the individuals appearing in “Foothills Fugitives” is current and accurate as of the date of production and may not reflect recent arrests or charges. An archive of recent episodes may be found under the “Foothills Fugitives”page on the Sheriff’s Office website.