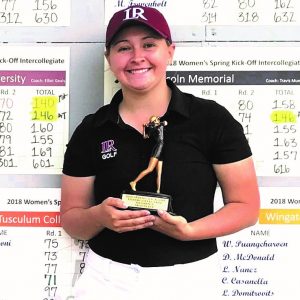 The Bears shot a 601 (+33) on the par-71, 5,844-yard course and defeated Tusculum by two strokes.  The victory was the second this season for Lenoir-Rhyne:  the Bears also won the Patsy Rendleman Invitational (October 9 and October 10) in Salisbury, N.C. Lenoir-Rhyne junior All-American Abbey Hartsell (Taylorsville, N.C.), last season’s South Atlantic Conference Women’s Golfer of the Year, was the top individual for the tournament.  Hartsell won by six strokes with a two-under 140.
Hartsell has three tournament victories in her career while sophomore Ainee O’Connor (Kent, UNITED KINGDOM) tied for second with a 146 (+4) on her way to all-tournament honors as well for the Bears.
Lenoir-Rhyne next competes in the Low Country Invitational on Monday, March 5, and Tuesday, March 6, in Bluffton, S.C.  The tournament is hosted by Wingate University.