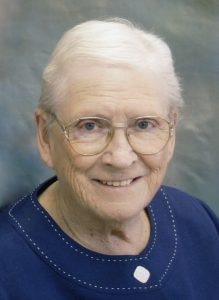 Betty Lou Harrington Echerd, 86, of Taylorsville, moved to her heavenly home on Sunday morning, March 4, 2018 at Catawba Valley Memorial Hospital. She had been in declining health for five months but died unexpectedly.

Betty was born August 26, 1931, in Alexander County, daughter of Loyd Parks and Dessie Metta Chapman Harrington. She was the eighth of thirteen children. Betty was a loving wife, mother, grandmother, great-grandmother, sister, aunt, neighbor, and friend.

Betty was a graduate of Taylorsville High School and Davis Hospital School of Nursing. She married John Hall Echerd on October 27, 1951, and upon his return from active duty in Korea, they made their home in the Ellendale Community.

Betty worked at the Alexander County Hospital until she resigned to raise her family. After her children were grown, she worked part-time at the Alexander County Health Department as a home health care nurse, and as a substitute teacher/volunteer at Ellendale Elementary School, but perhaps the job she loved most was helping to care for her grandchildren, great-grandchildren, and other children she kept over the years.

Maybe best known for her home-canned dill pickles, Betty loved to cook and sew. She made wedding gowns for many in the community, including her daughter’s wedding gown. She loved to work in her flower and vegetable gardens, preserving the vegetables that garden yielded.

Betty was an active, loyal, and dedicated member of St. Luke Lutheran Church until health issues prevented her from attending. She sang in the choir, taught Sunday school, served on various committees, helped to make hundreds of quilts for mission projects, served countless meals, and anything else that she thought would be helpful to others or would serve and honor her Savior.

She is survived by her loving husband of 66 years, John Hall Echerd. Her three children also survive: Jeffrey Echerd of Taylorsville, Johnny Echerd and wife Dottie of Hiddenite, and Libby Pennell and husband Roger of Taylorsville. She is also survived by her joys – her four grandchildren: Chris Echerd and wife Kim, Cody Echerd and wife Landy, Alisha Goggans and husband Kris, and Allie Kaylor and husband Justin. Her legacy continues in even more joy with her eight great-grandchildren: Jonathan, Laryn, and Hayley Echerd, Karson, Koen and John Thomas, Ruby Goggans, and Landry Kaylor. Betty is also survived by two sisters and a brother: Kay White of Taylorsville, Bobbie Potts of Shallotte, and Doug Harrington of Claremont. In addition, she leaves behind her neighbor and children’s childhood best friend who was like an addition child to her: Connie Sigmon. She also leaves behind many nieces, nephews, cousins, and friends.

The family would like to extend their gratitude to Megan Lively and her family. As Betty’s caregivers, they became part of our family and made it possible for Mama to be comfortable her last months at home. Betty’s home going leaves an empty place in our hearts and in our lives but we hold tight to our precious memories and to God’s promise that we will meet again one day.

The family will receive friends on Tuesday, March 6, 2018, from 2:00 p.m. until 3:45 p.m., at St. Luke Lutheran Church in Taylorsville. A celebration of life service will follow at 4:00 p.m. with Pastor Andrew Miller, Rev. Gary Jennings, and Seminarian Victor Shepherd officiating. Inurnment will be held at a later date in the Memory Garden at St. Luke.