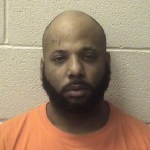 A man who is wanted in Virginia has been captured following a nighttime chase near Taylorsville.

The Alexander County Sheriff’s Office deputies arrested Anthony Jamille Lewis, age 38 of Salisbury, as the result of the chase, according to Sheriff Chris Bowman.

On Wednesday, March 7, 2018, at approximately 12:03 a.m., an Alexander County deputy saw a white Isuzu Rodeo in the area of US 64 and Church Road. The vehicle did not display a tag.

The deputy activated his blue lights and siren in an attempt to stop the vehicle. The driver failed to pull over and turned onto Church Road, then onto Turner Teague Drive, which is a dead end road. The suspect then stopped the vehicle, got out, and ran from the car. The deputy was able to find the suspect caught in some thorns in a wooded area and was able to take him into custody.

After the suspect was taken into custody, the Deputy learned that Lewis is wanted out of the State of Virginia for Attempted Murder and Arson. Lewis is also charged with fleeing to elude arrest with a motor vehicle, failure to display a registration plate, and driving while license revoked.

He is currently being held in the Alexander County Detention Center under a “no bond” order. The investigation is continuing.