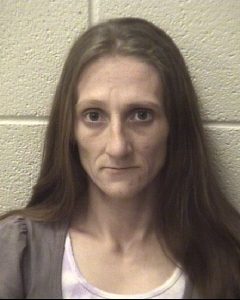 On Monday, March 12, 2018, investigators from the Alexander County Sheriff’s Office received a report in reference to threats made about placing bombs at East Alexander Middle School. Other threats were posted on social media. All threats are being taken seriously, said Sheriff Chris Bowman.

Further investigation revealed that the suspect in this case told others about the bombs, and that law enforcement “better hope they find them before they go off.” As it turned out, school was dismissed Monday, March 12, at 9:00 a.m. due to inclement weather.

The suspect in this case is Barbara Elizabeth Sherrill, age 29 from Lenoir. Ms. Sherrill also has an address in Hiddenite. With assistance from detectives with Caldwell County Sheriff’s Office, Ms. Sherrill was arrested without incident at her address in Lenoir.

Sheriff Bowman noted the Sherrill told others she was upset because her son had been expelled from East Middle School because of fighting.

She was transported to Alexander County Detention Center, where she was interviewed and charged with one count of Felony False Report of Mass Violence on Educational Property. She was placed under a $20,000 secured bond, with a first appearance date of Monday, March 19, 2018, in Alexander County District Court.

Bowman and the Alexander County Sheriff’s Officers take all threats made against any school, student, or faculty seriously, and, along with the District Attorney’s Office, will prosecute to the fullest extent of the law, he stated.