CHAPEL HILL— Marissa Brown from Alexander Central High School and Cole Benton from West Columbus High School have been named recipients of the NCHSAA Performance of the Week awards.

Each week two athletes in North Carolina High School Athletic Association competition are selected for this award from nominations received from media and school administrators. 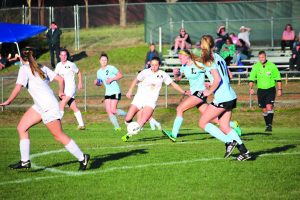 ACHS Senior Marissa Brown has been recognized by the NCHSAA for her performance last week in women’s soccer.

Brown, a senior on the Cougars women’s soccer team, had a career night against West Caldwell, scoring seven of the nine Alexander Central goals in the game. Two days later she tacked on two more goals in a 4-0 win over East Burke. Earlier this year she opened the season with a pair of hat tricks in games against Bandys and Bunker Hill. She has 15 goals and four assists through her opening four games.

Benton, a junior on the West Columbus baseball team, powered his squad to victory over St. Pauls. He threw a no-hitter, striking out 10 of 17 batters he faced on the mound. At the plate, he was a sparkling 3 for 3 with a pair of home runs and five RBI’s. His second home run ended the game early for the 10-run rule. He was 4 for 6 on the week with 4 runs scored, all while maintaining his 4.0 GPA.

Weekly recipients will be recognized on the NCHSAA Website and social media pages. They will also be honored at a banquet for all recipients from this year on April 28th