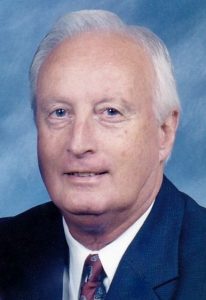 He was born August 20, 1936, in Hiddenite, son of the late Donald Leeper Kerley and Hazel Wingler Kerley.

In addition to his parents, he was preceded in death by an infant daughter, Tina Dawn Kerley, and siblings, Phyllis K. Patterson and Wendell Kerley.

He was a member of Western Avenue Baptist Church. Buford was a graduate of Hiddenite Senior High School and attended UNC Chapel Hill.

After retirement, Buford enjoyed working at both Twin Oaks and Fox Den Golf Clubs. He also loved spending time at Myrtle Beach, watching NASCAR and Atlanta Braves, and time with his family.

The family will receive friends from 2:00 – 3:45 p.m. on Sunday, April 8 at Western Avenue Baptist Church, Statesville, with the funeral service immediately following at 4:00 p.m. A private graveside service will be held for the family.

The family would like to thank Hospice and Palliative Care of Iredell County and the loving and compassionate staff at Gordon Hospice House. In addition, the family is grateful for the care provided Dr. Elmer Stout, and special caregivers, Billie Holbrook, Linda Speller, and Faye Morris.

Alexander Funeral Service of Taylorsville is serving the Kerley Family.