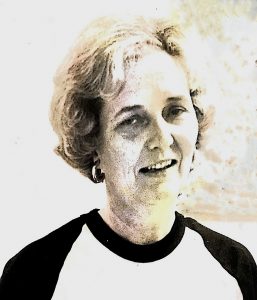 About six weeks ago, Mother realized the end of her battle with Parkinson’s was nearing. We were sitting in her room, waiting, as we did so often these last five years, when she clearly said, “I need a line—not a long line, just a line.”

There should definitely be a “genealogy line.” Ruby Lackey Little was born to George Woodard Lackey and Flossie Head Lackey on May 9, 1931. She was the youngest of seven siblings, all of whom preceded her in death, as did her husband, Carl Owen Little.

Another essential “line” is for education, career, and community. Some titles that apply include: tobacco farmer, clerk, mill worker, weaver, teacher, politician, and counselor.

Dr. Ruby was passionate about helping students (or anyone with whom she came in contact) realize their maximum potential, caring for them as if they were her own. Dr. Ruby, along with other strong women like Ruth Rufty, Ruth Thomas, and Winnie Duncan to name a few, played key roles in the establishment of ACHS as a premier high school in the early 1970’s.

The accomplishments of her students from the first adult basic education class in Alexander County was a source of great pride for Ruby. One received an award in Washington and several students were ministers who eventually earned a GED.

She served on several county boards and was Alexander County’s first female commissioner. She was a lifelong Democrat and was exceedingly disappointed when she did not get to cast a NC electoral college ballot for Al Gore.

Faith demands a “line.” Pisgah United Methodist was her home church, and the place where her “line” will be marked. In her time on earth, she lived her faith and was more than active at Tabernacle, Calvary, East Taylorsville, and Taylorsville Presbyterian.

The “travel line”: And then there is travel! She and Owen loved to travel the world. They made it their mission to instill a love of discovery in their children and grandchildren. It gave them great pleasure to show family, friends, and students this beautiful earth!

PS1: A line!.. Since it was virtually impossible to do a task to the point it was finished, I’m sure Ruby would want me to “tweak” these lines.

PS2: I am also sure she will try to let us know there are things we need to “do better!” and that she will be proud when we get it right!

A Celebration of Life service will be held at 2 p.m., Saturday, April 14, 2018 at Taylorsville Presbyterian Church. Rev. Steven Dagenhart and Pastor Paul Sink will be officiating. Burial will follow in the Pisgah United Methodist Church Cemetery. The family will receive friends from 6-8 p.m., Friday, April 13, 2018 at Taylorsville Presbyterian Church.

Adams Funeral Home and Cremation Services is honored to be serving the Little Family.