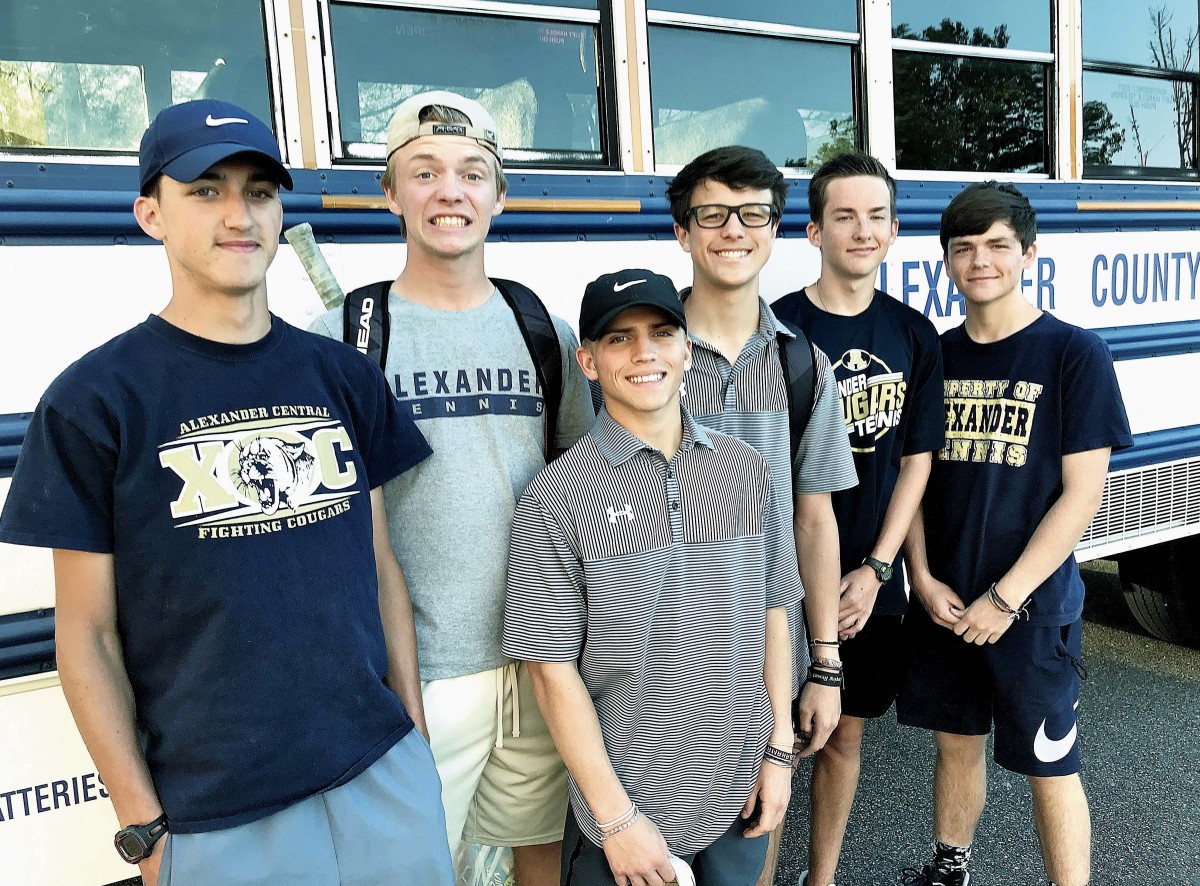 TOP SIX – Alexander Central’s 8-1 win over Hickory secured the school’s second ever playoff berth in men’s tennis. The team’s top six players for most of the 2018 season are pictured from the left: Jacob Campbell, Jackson Barr, Carter Patterson, Caleb Bolick, Chandler Davis, and Cameron White. The Cougars travel to South Caldwell on Thursday and will host the NWC 3A Tourney next week.

Cougars headed to post season for first time since 2004

By D.N. PENNELL, Jr.
A strong spring season for the Alexander Central Men’s Tennis Team continued this week as the Cougars claimed a pair of league wins over league rivals St. Stephens and Hickory High.
With the 5-4 home win over the Indians and 8-1 road victory over Hickory, the Cougars improved to 5-1 in NW 3A/4A matches. The team also claimed a state playoff berth for only the second time in school history and first time since 2004.
On Monday, April 16, the Cougars (12-1) hosted St. Stephens for the team’s Senior Match. Despite the cold temperatures and howling winds, the Cougars claimed five wins in singles play and claimed a 5-4 win in the team score. Carter Patterson, Jackson Barr, and Chandler Davis won in straight sets, while Cameron White and Caleb Bolick won their respective matches in third set tiebreakers.
The following afternoon, the Cougars traveled to Hickory High School to face the Red Tornadoes for the league’s second spot in the 3A dual team state playoffs.
The Cougars rolled to a 6-0 finish in singles and won two of three doubles matches to claim an 8-1 win. Patterson, Barr, Davis, White, Bolick, and Jacob Campbell all won in straight sets in singles play. In doubles, Barr and Davis teamed up for a win on court two, while Bolick and Rhett Chapman combined to win on court three.
Cory Earp and Garrett Ferguson recorded exhibition wins for ACHS.
ACHS is set to close the NWC schedule on the road at South Caldwell on Thursday, April 19. The Cougars will serve as hosts for the 3A portion of the NWC Tournament next week at the ACHS Courts. The tournament is slated to be played on Tuesday, April 24 and Wednesday, April 25.