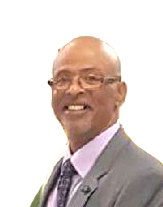 He was born November 15, 1960, in Rocky Mount, NC, the son of Geraldine H. Avent and the late Joseph Williams.

He was a preacher with heart and a minister with license, also called and appointed and not forgotten, ordained of God to preach the Word of God to a lost and dying world unto repentance. In other areas of his life, he attended Shaw University in Raleigh, NC, for Broadcasting, licensed as minister at New Destiny Rocky Mount NC, in August of 2009, licensed from Love & Unity Resurrection Assembly in Taylorsville, NC, in 2001.

He leaves a legacy of success and achievements: first thing in the morning, family prayer. He had a love for music, singing, preaching and his favorite verse in the Bible was Matthew 6:33 “But seek ye first the Kingdom of God and his righteousness, and all these and all these things shall be given unto you.”

Including his father, he was preceded in death by his adorable grandson, Tyson Lee Hughes, age three years old, of Charlotte; and a brother, Thurman Williams.

The home-going service will be held at 2 p.m., Sunday, May 6, 2018, at Love & Unity Resurrection Church. Pastor Laura Smith-Jones will officiate. Burial will follow in the Love & Unity Church Cemetery on Polk Street, Taylorsville, NC 28681.

Adams Funeral Home and cremation services is honored to be serving the Williams Family.