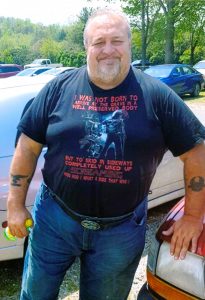 David Leonard Norris, Jr. passed away unexpectedly of a heart attack on May 7, 2018, in Lambsburg, Virginia, in the sleeper of his big rig, at a rest area. His home base was Claremont.

He was a professional truck driver for 33 years; mostly long haul, some flat bed and short haul. He was employed by Leonard Trucking in Bethlehem for the last 4 1/2 years.

He is survived by his parents, David L. Sr. and Linda Norris; a brother, Matt Norris and wife Jax of Bethlehem; two sisters, Jaymie Bodenheimer and Phil of Winston-Salem, and Linda Fincannon and Danny of Stony Point; a son, Jeremiah Norris of Claremont; a daughter, Nicole Resendiz of Bethlehem; a stepson, Nicolas Crossno of Hickory; three grandchildren, Colby, Carmen and Lilly Resendiz of Bethlehem; and many nieces and nephews who loved Uncle Junior.

Although he was on the road a lot, he was a history buff and knew a lot about Indians and the Wild West. He had many friends out on the road and they will miss the Gypsy Rebel. Now, he is riding the sky with Jesus.

A memorial service will be held on May 19, 2018, at 5 p.m., at Promised Land Ministries Church in Bethlehem.