Alexander Central High School junior Lyndon Strickland led the way for the Cougar Track and Field Team at the North Carolina High School Athletic Association’s 3A Western Regional held at Watauga High School in Boone this past Saturday, May 12.

Strickland led a group of five ACHS state qualifiers with a pair of first place finishes in throwing events at the Regional event used to set the field for this week’s 3A State Championship meet. 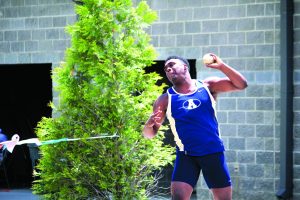 Strickland’s two wins, coupled with several other impressive efforts allowed ACHS to earn a sixth place finish in the men’s team standings. Alexander’s top thrower all season, Strickland posted a throw of 155’11” to capture the men’s discus championship by nearly 20 feet ahead of Burns’ thrower Stormy Mosteller. His distance of 49’1.5” edged James Mazzarell of Marvin Ridge for the top spot.

Castellaw was the second Cougar to earn a spot at states with his third-place showing in the 3,200-meter (two mile) run. Castellaw record a time of 10:01.60. Another distance runner for ACHS, Logan Ellis, narrowly missed a spot at the state meet with his effort in the 800-meter run. Ellis posted a school record time of 2:01.58 to finish seventh in a very talented field of runners.

Kacey Payne placed third in shot put to get another pass back to NC A&T. She posted a throw of 32’1”.

Alexander third female qualifier was Key Key Miller in the women’s triple jump event. Miller moves on to the state championship in 3A with her third place finish at the regional meet. She recorded a triple jump distance of 35’6.5”.

The NCHSAA 3A State Championship Meet is set to begin at 10:00 am on Friday morning, May 18, at the Irwin Belk Track on the campus of North Carolina A&T in Greensboro.