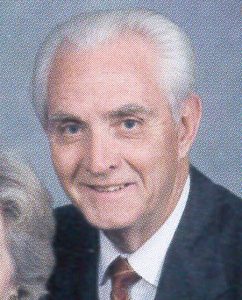 Born December 8, 1935, in Alexander County, he was the son of the late William Burette McAlpin and Edith Stafford McAlpin.

In addition to his parents, he was preceded in death by a baby daughter, Kelly Marque McAlpin, four brothers, and five sisters.

Don was a veteran of the US Marines, serving during the Korean War. He was the owner of Don McAlpin Construction for 40 years, a member of the Builder’s Association, partner in the Builder’s Mart of Catawba County, Manager of the Excavators Grading Company, on the board for the County Equalization and Review, and part owner of M&M Motors in Taylorsville and 4M Auto Sales in Hickory.

Mr. McAlpin was a member of Viewmont Baptist Church, where he was a former Chairman of the Deacons and served on various other committees at the church. He never met a stranger and enjoyed spending time with his many friends, but his greatest joy was his family, especially his grandchildren.

The funeral service will be held at 2:30 p.m. on Sunday, May 20, 2018 at Viewmont Baptist Church with Gideon John Pope and Rev. Dr. Earl Davis officiating. Burial with full military honors will be held at Catawba Memorial Park. The family will receive friends on Saturday evening, from 6 – 8:00 p.m., at Bass-Smith Funeral Home in Hickory.

Honorary pallbearers will be members of the Hickory Camp of Gideons International.

The family would like to thank the staff of Catawba Regional Hospice, in both Newton and Sherrills Ford, for their care and support.