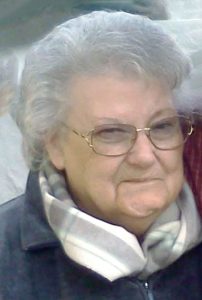 Blanche Beaver Jolly, 79, of Central Drive, Statesville, went to her heavenly home on Monday, May 21, 2018.

Blanche was born on September 30, 1938, in Cabarrus County, the daughter of James Augustus Beaver and Evelyn Merson Beaver.

She had been employed at Thor-Lo Hosiery as a knitter for many years. She was a life long member of Hiddenite Baptist Church, where she loved to sing in the choir and work with the young people of the church.

Blanche adored her grandchildren and always looked forward to her trips to Oak Island. Her special friends and neighbors were Alene Alexander and Mae Knight.

Including her parents, she was preceded in death by the love of her life and father to her children, John P. Jolly, Jr., and son-in-law, Richard Ashley.

The funeral service will be held at 2 p.m., Wednesday, May 23, 2018 at Hiddenite Baptist Church. Rev. Zack Deal and Rev. Dan Spears will officiate. Burial will follow in the Hiddenite cemetery. The family will receive friends from 1 to 2 p.m. prior to the service.

Honorary pallbearers include: Corbin Smith and Will Miller.

Memorials may be given to: Hiddenite Baptist Church, PO Box 38, Hiddenite, NC 28636.

Adams Funeral Home and Cremation Services is honored to be of service to the Jolly Family.