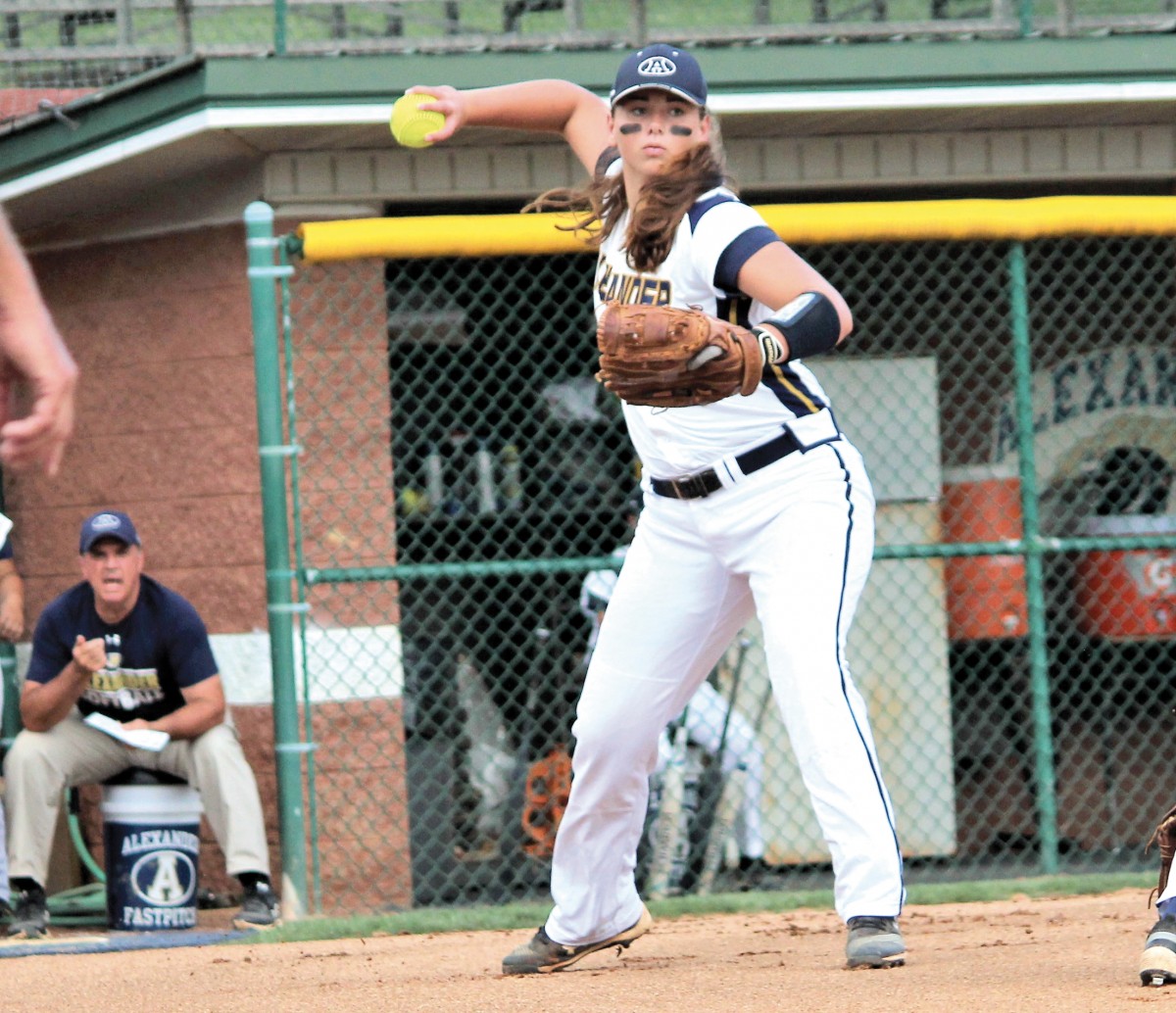 GAME ONE TO AC – Alexander senior pitcher Chesney Millsaps fired the ball to first to cut down a runner during the first inning of Tuesday’s 5-4 win at Central Park.

By D.N. PENNELL, Jr.
Alexander Central waited out a one-hour rain delay and held off a furious seventh inning rally by the Carson Cougars to escape with a 5-4 win in game one of the NCHSAA 3A Regional Series on Tuesday evening, May 22, in Taylorsville.
The Cougars built a 2-0 lead early and held a 5-1 lead entering the fifth and thwarted a Carson comeback attempt in the final frame to win 5-4.
With the win, the best-of-three series will move to China Grove for the second game, scheduled for Thursday, May 24, at 6 pm at Carson High School. If needed, a third game would be played at Central Park on Friday evening, May 25. Both games are set for 6 pm.
The winner of the series will represent the West Region in the 2018 NCHSAA 3A Championship Series, which will be played at either UNC Greensboro or NC State University on June 1-2.

In Tuesday’s exciting win in Taylorsville, the Cougars set the tone early with a pair of runs in the home half of the first inning. Julie Gast and Chesney Millsaps collected back-to-back RBI hits in the first as the Cougars jumped on top 2-0.
After Carson scored a single run in the top of the fifth, ACHS came back with a three-run uprising in the home half of the inning. Millsaps homered for Alexander’s first run of the fifth to make the score 3-1. Later in the frame, sophomores Ashley Seagle and Mattie Starnes knocked in one run each to up the ACHS lead to 5-1 entering the fifth stanza.
Carson climbed a little closer in the sixth inning with a single run. However, a sparkling defensive effort by Alexander’s Julie Gast and Gracie Rhoney produced the final out of the inning and ended the rally. Rhoney left her feet to smother a grounder up the middle and managed to flip the ball to Gast to force a Carson run at second base for the final out of the frame. 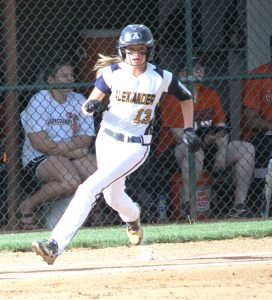 FAST START – ACHS senior Julie Gast rounds first base on her way to second after knocking in the first run of Tuesday’s 5-4 win over Carson at Central Park in Taylorsville. Gast and Chesney Millsaps plated runs for ACHS in the first as the Lady Cougars built an early 2-0 lead.

In the seventh, things became very interesting when the Carson Lady Cougars mounted another huge comeback effort. Carson scored a pair of runs in the top of the frame and had another base runner picked off second base before a lightning flash was spotted and the game was stopped with two outs and the tying run at second.
After a weather delay of one hour and 12 minutes, the teams returned to the Central Park field a little after 9 pm.
When the game resumed, Chesney Millsaps issued a walk to the batter of record at the time of the delay. The next batter hit a grounder to the backhand side of Alexander’s Gast at shortstop. The Cougar senior fielded the ball and threw a strike to Mattie Starnes at first base to nip the Carson runner by a step for the final out.

The close play was argued by the Carson dugout resulting in ejections of a JCHS player and assistant coach.

On the night, ACHS tallied nine total hits and were out-hit for the second straight playoff game. Millsaps and Gracie Rhoney paired hits to lead Alexander’s offensive output.
Maci Cooper, Karly Hales, Kaitlyn Honeycutt, and Jess Freeze paired hits for Carson.
Chesney Millsaps recorded the pitching win in the circle to up her record to 25-5 on the season. She allowed four runs on 11 hits and struck out one.
Rylie Stewart was saddled with the mound loss for Carson.

ACHS Softball travels to Jesse Carson Thursday, May 24th for a 6:00 pm Regional contest.  Admission:  $7.00 with NO passes allowed other than NCHSAA, NCCA and the Senior Tar Heel Card.

Fans are advised to bring a lawn chair as bleacher space is limited
Posted in Breaking News, Sports