A high speed chase across two counties led to the arrest of a Catawba County man on Monday night, May 21, 2018.

The man drew the attention of the law when his speeding car was observed on Millersville Road on Monday night. N.C. State Highway Patrol Trooper A.P. Millsaps was running a radar point on Millersville Road about 9:50 p.m. when he clocked the suspect at 60 mph in a 45 mph zone. Millsaps followed the suspect, who slowed twice but did not heed the blue lights and siren to stop.

The suspect car traveled eastbound on Millersville, then went onto Paul Payne Store Road, Mt. Wesley Church Road, Old Charlotte Road, Liberty Church Road, and ran several stop signs while reaching 70-plus mph on the secondary roads. At Millersville Road again, the suspect traveled left of center around the traffic island, nearly striking an oncoming motorist, then traveled westbound on Millersville. The suspect, later identified as Frank Rosenbaum, III, age 47 of Conover, then led officers on an even faster high-speed chase, going to NC 16 South and passing cars on double yellow lines, reaching triple-digit speeds. Millsaps said he stayed a safe distance back from the suspect car as it reached speeds of 115 or 116 mph. Rosenbaum passed a car on the Oxford Dam bridge on NC 16 going about 70-80 miles per hour, and in Catawba County spun out of control when he attempted to brake suddenly to turn at St. Peters Church Road. 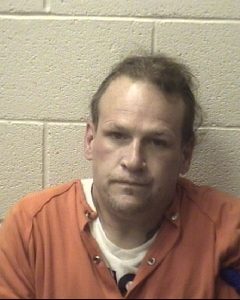 Rosenbaum attempted to drive away, but Millsaps performed the PIT (Pursuit Intervention Technique) maneuver to spin out Rosenbaum’s car. Then Rosenbaum reversed out into a field near St. Peters Church Road and fled on foot. Millsaps exited his car and gave chase on foot. Rosenbaum was apprehended a short time later near an adjacent building.

Rosenbaum is charged with Fleeing to Elude Arrest, two counts of Assault with a Deadly Weapon on a Government Official, Resist/Obstruct/Delay an officer, Driving While Impaired, as well as several traffic violations: Driving While License Revoked, Possession of a Stolen Tag, speeding 115/50 zone, speeding 60/45 zone, Careless and Reckless Driving, three stop sign violations, Driving Left of Center, Fictitious Tag, No Insurance, and Failure to Register Motor Vehicle with DMW, according to Trooper Millsaps. Bond was initially set at $22,000 but is expected to increase.

Rosenbaum has pending charges in Catawba County for trafficking opium. His vehicle was seized after the chase.

Hayes is suffering from a sore arm and shoulder but will recover, said Sheriff Bowman. Millsaps was not injured.