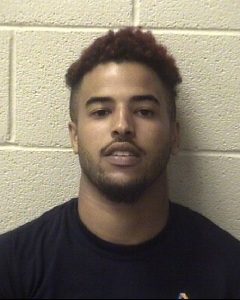 A Taylorsville man was arrested after he apparently crashed his ATV into a female pedestrian, then severely beat her boyfriend in the Highland area of Taylorsville last week.

The Taylorsville Police Dept. report stated that officers responded to a collision of an all-terrain vehicle (ATV) with a pedestrian in the area of Fifth Avenue North and Shadowwood Drive on Tuesday, May 15, 2018.

There had been reports of a man riding an ATV around the neighborhood very fast in areas where children play. Officers learned that a woman had argued with the male ATV rider, who was later identifed as Hildred Tyron Boston, age 24 of Taylorsville.

Apparently, Boston then drove the ATV away from the female victim after the argument. She turned away, but moments later, he sped down the road and struck her with the ATV. About half a dozen witnesses told police Boston deliberately drove the machine into the woman. The impact severely injured her, knocking out teeth and nearly severing her chin from her face. It also flipped the ATV on top of Boston.

The woman’s boyfriend walked over and tried to assist her and attempted to detain Boston, but Boston then beat the male victim severely, police were told.