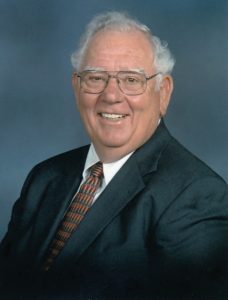 Blayne Edison Hollar, 86, of the Antioch Community, passed away on Tuesday, June 5, 2018, at his residence.

Born to the late Jay Hugh and Harriet Katherine Moretz Hollar on March 7, 1932, he was a graduate of Taylorville High School and Clevenger Business College. He was a veteran of the U.S. Army, having served during the Korean Conflict with the Army Security Agency in several duty stations, including Japan and the South Pacific.

Before Korea, he was employed at Century Furniture and then at Burlington Industries on his return. He later retired from Clayton Marcus Furniture. Blayne loved to travel and trips included South America, to visit his daughter and her husband who were missionary journeymen, as well as all over the U.S. and Canada, following his retirement.

Mr. Hollar was very active in Antioch Baptist Church, serving in various capacities. He was a volunteer in the Alexander County schools and served on the Member Advisory Board of Blue Ridge Electric Corp., Board of Directors of Citizens Savings Bank, and the Catawba Valley Advisory Board of BB&T Bank.

He enjoyed visiting with his children and grandchildren. He was an avid gardener and loved to hunt and fish. He enjoyed the computer, flea markets, raising beef cattle, and watching the birds.

In addition to his parents, he was preceded in death by his wife, Ethel Mae Goble Hollar, and brother, Johnny Hollar.

The family will receive friends on Thursday evening, June 7, from 6-8 p.m., at Antioch Baptist Church. The funeral service will be held on Friday, June 8, at 4 p.m., at Antioch Baptist Church. Burial will follow in the church cemetery with Rev. Mark Morris, Rev. Gary Jennings, and Rev. Mike Johnson officiating. Military Honors will be afforded by Disabled American Veterans Post 84 of Taylorsville and Post 6 of Hudson.