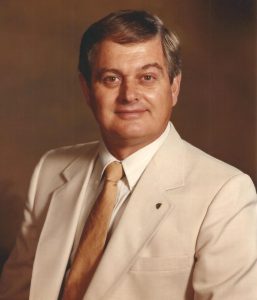 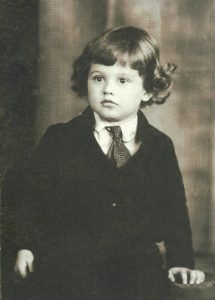 Born on June 18, 1933, Raeford was a lifelong resident of Hiddenite, except while serving as a sergeant in the United States Army Signal Corps in Korea. He was the oldest child born to Paul Alexander Thomas and Dorothy June Lackey Thomas.

Katherine and Raeford worked tirelessly over the years to provide for their children’s college educations, sacrificing to save in the early years of their marriage. Raeford began his career as a sanitarian with the Catawba and Iredell County Health Departments.

In 1961, agent Harvey Fincannon retired and Raeford became a Nationwide Insurance agent until his retirement in 2004. A successful businessman, he received many awards for his achievements, but was most honored by receiving the company’s National Community Service Award a record three times. Katherine was his office manager and she and their staff worked energetically to support him and enable him to serve the community as he did.

Raeford was awarded the Lion’s Club Life Membership after organizing many Christmas parades, golf tournaments, and county fairs. On the planning board for the consolidation of the three county high schools in the early 1970s, Raeford was particularly proud of attending the first 95 straight varsity football games, home and away, for Alexander Central. He enthusiastically attended athletic events while his children attended ACHS and were involved in a variety of sports. Later, he supported his grandchildren, as long as his health allowed.

Thomas Insurance sponsored athletic teams of all ages over the years and Raeford coached Little League Baseball for several years. An avid golfer, Raeford shared many days on the links with good friends, and made two holes-in-one.

Bettering the lives of their neighbors was a priority for the Thomases. Raeford volunteered his time on the United Way Board and served as a major supporter for the YMCA as well as an Adams Funeral Home stockholder. He served two terms on the Alexander County Social Services board, and helped organize Crime Stoppers. Raeford helped with fundraising for the first library in Alexander County, served as president of the Chamber of Commerce in 1989-90 and was named Alexander County Citizen of the Year in 1980. He also served as president of the Iredell County Insurance and Financial Advisors, and was the Jaycee Young Man of the Year in 1968.

His brothers and sister formed The Thomas Quartet, following in the footsteps of his father and aunts. They used their talents harmonizing gospel music for the glory of God. Believing that the arts are God’s gift to enrich lives, Raeford’s aunt and uncle founded the Hiddenite Arts and Heritage Center where he served on the board of directors for many years.

Hiddenite United Methodist Church is where Raeford and family have worshiped since his birth. A dedicated member of the congregation, his and Katherine’s voices graced the choir for many years, they led the youth, he taught Sunday school, served as a lay speaker and chaired the church board. Every New Year’s Eve he and a child or grandchild would ring in the new year by pulling the church bell rope, waking up Hiddenite!

When the fire alarm sounded, Raeford would don his heavy coat and helmet and answer the call at the Hiddenite Volunteer Fire Department, acting as Assistant Chief and also Secretary of the Board for 48 years. As sexton, Raeford marked the graves and oversaw the care and upkeep of the Hiddenite Cemetery for decades. Many proclaimed Raeford the unofficial “mayor” of Hiddenite because if he couldn’t fix the problem, he knew someone who could. The community knew he cared and would take action.

Raeford had a joyful spirit, which he shared with all around him. He never met a stranger, and loved to tell stories, which he often embellished. He lived his life and raised his family following Luke 6:31 and a variation of it…to treat everyone the way they wish to be treated (The Platinum Rule), to have caring hearts, and to respect and serve others.

In his final months, Raeford could no longer speak but was a great patient, enjoyed visits from loved ones and friends, and was comforted as Katherine devoted her life to caring for him.

The family is so grateful to the many loving and kind Hospice workers and to special caregivers, Amy Barr, Libby White, Sheila Anderson, Kaye Christie, and his granddaughter, Leigh Sellers, who used her CNA and nursing skills to lovingly care for her “Gamps”.

Burial will take place at 2 p.m., Monday, June 11 at the Hiddenite Cemetery with full military honors accorded by DAV Chapter 84 and Chapter 6. A Celebration of Life will be held at Hiddenite United Methodist Church at 3:00 p.m., followed by a reception at the Hiddenite Center Educational building at 70 Hiddenite Church Road, Hiddenite, NC 28636.

Adams Funeral Home and Cremation Services is honored to be serving the Thomas Family.