By D.N. PENNELL, Jr.
After spending the last three football seasons on the sidelines, former Alexander Central High School Head Coach has come out of retirement to accept the Head Coach position at North Lincoln High School in Pumpkin Center. Bazzle, who spent four seasons at ACHS before stepping away in January of 2016, was approved as the new Knights’ Head Coach at the Lincoln County School Board Meeting on June 12. 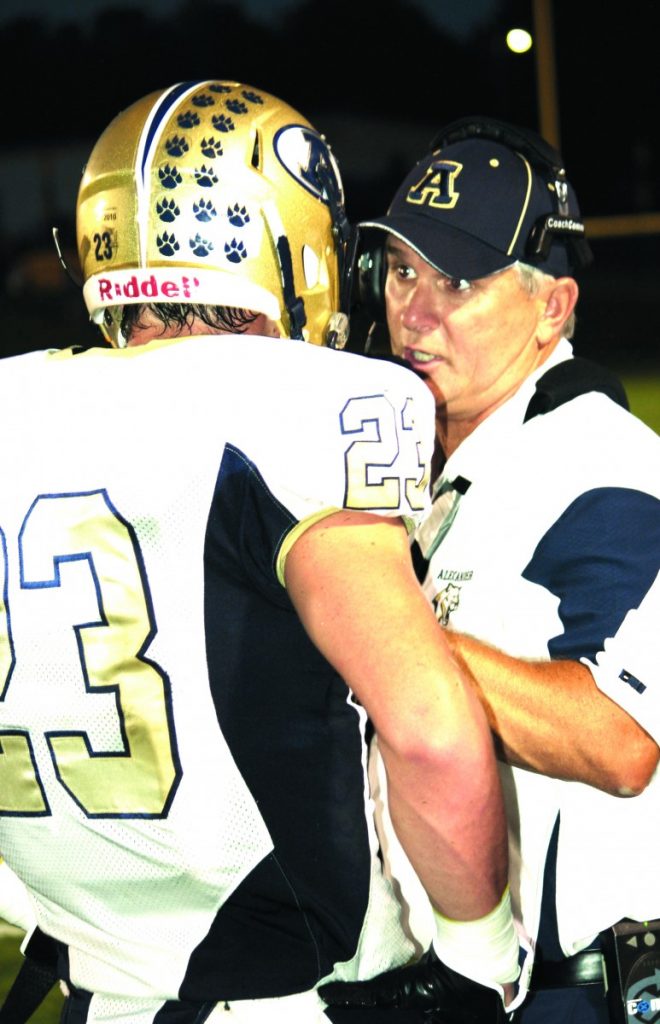 Bazzle replaces Steven Pack at North Lincoln after he was hired at Newton-Conover High School late last month. Pack led the Knights to a 2-9 record in 2018.
Coach Bazzle took over the ACHS program prior to the 2012 season and led the Cougars to back-to-back playoff appearances in his first two seasons in Taylorsville. However, the Cougars missed the playoffs in 2014 and 2015 after finishing 4-7 and 3-8 the past two seasons.
Bazzle compiled a 17-29 record in his four year tenure at Alexander Central. He retired with an overall coaching record of 129-85.
Prior to accepting the ACHS job in the spring of 2012, Bazzle spent 24 years at Newton-Conover High School and served as the Red Devils Head Coach for the past 13 seasons.
During his tenure as Head Coach for Newton, the Red Devils played in three State Championship games and won the 2A State Championship in 2008.
Bazzle’s teams won five conference titles, and he received five Coach of the Year Awards since becoming Newton’s Head Coach in 1999. He was voted the Hickory Unifour Coach of the Year in 2000 and 2008.
He was a standout prep player at East Lincoln High School, earning a football scholarship to attend Guilford College. He was voted Team MVP at Guilford in 1982 and earned the Senior Athletic Award at the School in 1983.
After graduating from Guilford College in 1984, Bazzle took a position at his alma mater, East Lincoln, where he served as defensive coordinator.
Bazzle took a job with Hall of Fame Coach Don Patrick at Newton-Conover in 1987. He served as an assistant coach for Patrick until being promoted to Head Coach after Patrick’s retirement in 1999.
After Bazzle took over the direction of the Newton-Conover program in 1999, the Red Devils compiled a 112-56 overall record. He has also served as an assistant in the state’s two biggest All-Star games.
In 2008, Bazzle was the defensive coordinator for the West in the NCCA East/West All-Star Game. Two years later, he held the same position for the North Carolina Team for the Shrine Bowl of the Carolinas Game.
Coach Bazzle’s new team will face his old team later this year when North Lincoln hosts Alexander Central in a non-conference game on September 7, in Pumpkin Center.