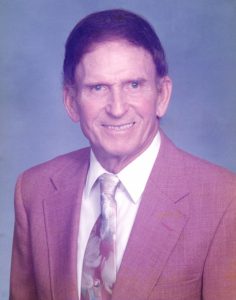 Millard Ree “Buddy” Patterson, 94, passed away at his home, in Hiddenite, on June 17, 2018 following a period of declining health.

Born February 3, 1924, in Alexander County, he was the son of the late William Allie Patterson, Sr. and Lola Gwaltney Patterson.

He married Jenny McLelland Patterson on November 12, 1943, and they celebrated 70 years of marriage before her passing on February 9, 2014.

His military training was in the handling of bombs and B-29 Aircraft ammunition. His military occupations were Military Specialty, Truck Driver, Munitions Worker, and his participation in battles and campaigns were Air Offensive Japan and Eastern Mandates.

After military discharge, he returned to the Patterson farm to raise a family with his beloved Jenny. He was a life-long farmer and a plumber for 30 years at Watts Plumbing Company, Statesville.

Over the course of 70 years, he completely remodeled the 1896 home-place of his grandfather, Alexander Beauregard Patterson. Buddy was an experienced and meticulous gardener, master plumber, builder, electrician, pool installer, landscaper, and timber cutter.

He loved sharing his gifts and abilities with family and friends. Work has been his main pastime, with weekend NACSAR events.

His greatest enjoyment was sharing his life with Jenny and the gatherings at their home and pool, playgrounds, and sharing time, celebrations, and vacations with family created wonderful memories. Sunday was his favorite day: CHURCH and NASCAR.

Buddy was a faithful member of the Mountain View United Methodist Church, Statesville and was recognized as 2014 Outstanding Veteran. His church family provided much love and joy to his life. He was a dedicated volunteer in his church and community and he received the 1999 NC Governor’s Volunteer Award for years of service at The Hiddenite Center.

The family will receive friends Wednesday, June 20, from 6:00-8:00 p.m, in the sanctuary of First Baptist Church, Taylorsville. The funeral service will be Thursday at 1:00 p.m., at Mountain View United Methodist Church, 538 Mountain View Road, Statesville, with Rev. Sarah P. Fisher officiating. Burial with military rites offered by American Legion Post 113 will follow in the church cemetery.