Former Alexander Central baseball standout Tad Ratliff is currently in his second season with the Kansas City Royals organization as a member of the Class A Lexington Legends Baseball Club. 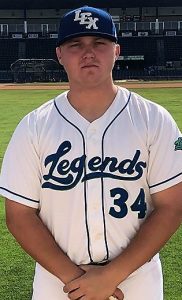 Ratliff, who graduated from ACHS in 2014 and signed with the Royals last summer after three seasons at Lenoir-Rhyne University, is a right handed reliever has appeared in seven games for the Legends out of the bullpen. He has compiled a 1-0 record in 15.2 innings of work and has compiled a 2.30 earned run average. In his last outing on June 24 vs. the Columbia Fireflies, Ratliff equaled his season high with three innings of work. He allowed one run in the outing.

Through his first seven appearances, he has recorded 16 strikeouts, while issuing just four base on balls.

The Lexington Legends are a Minor League Baseball team in the South Atlantic League (SAL), and the Class A affiliate of the Kansas City Royals. The team is located in Lexington, Kentucky, and plays their home games at Whitaker Bank Ballpark, located in a commercial area on the northeast side of the city.

Tad is the son of Annetta and Terry Ratliff of the Ellendale Community.