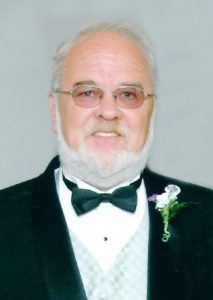 Frankie Conway Patterson, 66, of Cheatham Ford Road, Hiddenite, went to be with his heavenly Father surrounded by his family on Sunday, July 1, 2018 at Iredell Memorial Hospital.

Frankie was born February 15, 1952, in Johnston County, the son of the late Lynn Clifford Patterson and Beulah Small Patterson.

He was a past president of Alexander County Crime Stoppers, was the owner and operator of Custom FrameCrafters, Etc., and was a retired employee of Lowes Companies, Engineering and Construction Department.

His most treasured memories were endless hours outside on his gazebo that he constructed, serving the community through his business, playing an active role in local fire departments, but most importantly spending time with his family on ball fields, ball courts, and endless grandchildren events.

Those left to cherish his memory include his wife of 49 years, Connie Lovin Patterson of the home; a daughter, Amanda Patterson Johnson and husband Chris of Statesville; a son, Clint Franklin Patterson and wife Lori of Hiddenite; grandchildren, Brett, Cole and Luke Johnson, and Riley and Caleb Patterson; a brother, Donald Patterson and wife Alva Jean of Morganton; a sister, Helen Jones and husband Ron of Florida; nieces, Glenda Poarch, Susan Badneck and husband Tom, Julie Broombaugh and husband Andrew, Leslie Mull and husband Travis, Jennifer Roy and husband Kenny, Erica Harmon and husband Harvey, and Heather Kaczor; nephew, Josh Patrum and wife Tessa; and a number of great-nieces and a nephew.

Adams Funeral Home and Cremation Services is honored to be serving the Patterson Family.