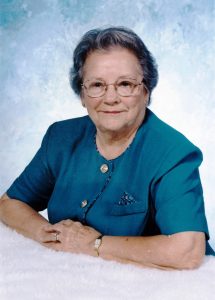 The daughter of Fernie Amos and Minnie Estelle Heath, Ruth married the love of her life, Clarence Roy Davis, who preceded her in death in 2001. They enjoyed 58 years together, forged a happy life from their humble beginnings on Baker’s Mountain and raised four children, Dorothy Canipe, Ann Davis, Carolyn Scronce, and Jeff Davis.

Ruth was a warm, loving force of nature who doted on her children, grandchildren, and great-grandchildren with a sparkle in her eye and a contagious laugh. She was always ready with a hot meal, caring shoulder, and the fierce belief that God was her foundation.

Ruth cared for Clarence in his final years and never wavered in her devotion. Caregiving was part of Ruth’s nature. She always had an open door and time to sit and talk around the kitchen table.

She taught her son to swing a bat, learned to drive in her 40s, sewed beautiful clothes for her girls, canned from a bountiful garden, had a weakness for shoes and purses, and delighted in seeing babies even after Alzheimer’s wiped away so many treasured memories.

Ruth was a ravenous reader but her lifelong passion was her family. Until the last month of her life, she would exclaim, “I just love people.” Ruth was kind, funny, and made the best chicken dumplings and biscuits in the world. She adored dogs and raised litters of Dachshunds. J.J. was her most faithful four-legged companion. She was a lifelong member of Royal Chapel Church of God.

Along with her parents and husband, Ruth was preceded in death by her brothers and sister, Woodrow Smith, Josh Smith, Bob Smith, Billy Heath, and Myrtle Bowman; and son-in-law, Jerry Canipe.

Visitation will be Friday, July 20, at 3 p.m., at Mount Pisgah Lutheran Church in Bethlehem. A memorial service will follow at 4 p.m.

In lieu of flowers, please donate to Trinity Village or Hospice. We thank the amazing caregivers who comforted our beloved mother and grandmother in her final years.

Bass-Smith Funeral Home in Hickory is serving the family of Mary Ruth Davis and on-line condolences may be sent to www.bass-smithfuneralhome.com.