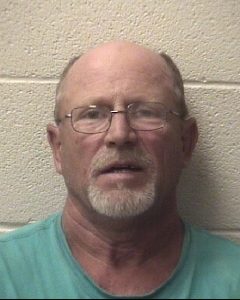 A Taylorsville man has been arrested after he fired a gun near firefighters responding to a fire scene.

Upon arrival, the firemen heard a loud pop and later learned that a man who lived across the street had discharged a firearm in the direction of the firemen.  The firemen told the occupant of the property to go back into his residence, and retreated to the fire truck, where he radioed for law enforcement backup to respond emergency traffic in reference to shots fired.

Deputies from Alexander County Sheriff’s Office responded to the backup request, where they found Michael Douglas Porter, white male, age 54, of Icard Ridge Road, Taylorsville.  Porter was charged with Felony Assault with Deadly Weapon on Emergency Personnel.  He was transported to the Alexander County Detention Center, where he was placed under a $20,000 secured bond with a first appearance date of July 16, 2018, in Alexander County District Court. The investigation is continuing.

On Wednesday, July 11, 2018, additional charges were filed in connection with this incident.  Porter was charged with two counts of Felony Assault with Deadly Weapon With Intent to Kill.  His bond was increased to $100,000 secured by the Magistrate’s Office.