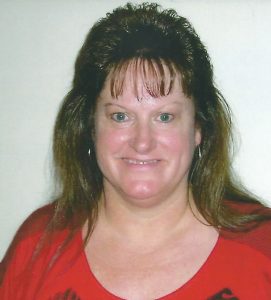 Teresa Levan Brookshire, 56, of Rachels Lane, Taylorsville, went home to be with the Lord on Monday, July 16, 2018 at Catawba Regional Hospice.

Mrs. Brookshire was born September 14, 1961, in Alexander County, the daughter of the late James Howard Levan and Carolyn Knox Bentley.

She had worked as a bank teller for Taylorsville Savings Bank and was of the Christian faith. She loved God and was a loving wife, mother, and grandmother. She was a very neat person and was always stopping to pluck weeds out of the yard.

Including her parents, she was preceded in death by a sister, Debra Keller of Arkansas.

Those left to cherish and honor her memory include her husband who she married on November 8, 1981, Randy Brookshire; two sons, Scott Brookshire and wife Brianna of Taylorsville, and Kevin Brookshire and fiancée Krista of Statesville; three grandchildren, Tucker, Kinsleigh, Preston and one on the way; mother-in-law, Ora Lee Brookshire of Taylorsville; sister-in-law, Deloris Austin and husband Dale of the Bethlehem Community; a sister, Sherry Collins and husband Roger of Morganton; two brothers, Eddie Levan and wife Dana of Nevada, and Philip Wurz of Hickory; and several nieces and nephews.

A celebration of life service will be held at 2 p.m., Saturday, July 21, 2018 at Adams Funeral Home Chapel. Rev. Mike Johnson will officiate. The family will receive friends from 1-1:45 p.m. prior to the service.

Memorials may be made to: American Cancer Society, Local Chapter, C/O Kendra Dyson, 57 Kendra Lane, Taylorsville, NC 28681.
Condolences may be sent to: www.adamsfunerals.com.

Adams Funeral Home and Cremation Services is honored to be serving the Brookshire Family.