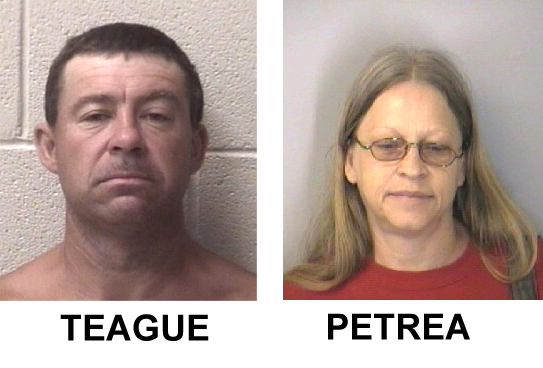 A recent dispute between a woman and her nephew led to shots being fired, and ultimately resulted in arrest of both persons involved.

At approximately 8:44 a.m. on July 19, 2018, Alexander County Communications received a call from a residence located on Confederate Drive in the Wittenburg Community, according to Sheriff Chris Bowman.

Officers arrived on the scene and found a female, later identified as Teresa Petrea, at the scene who stated that her nephew Nathan Teague had come to her camper on the property, asking for money owed to him. An argument between Nathan Teague and the Petrea ensued before he allegedly threatened to kill her.

Petrea then retreated to her camper and retrieved her gun before confronting Teague by firing a shot toward him, striking his truck.

Teague fled the scene and retrieved a shotgun before returning to the camper. Petrea stated she heard a truck pulling up to the camper a short time later and then a gunshot and the sound of pellets hitting the side of the camper.

Officers also arrested the woman, Teresa Diane Petrea, age 59 of Taylorsville, on one count Felony Shooting into an Occupied Vehicle.

Both have a first appearance scheduled for July 23, 2018, in Alexander County District Court in Taylorsville.