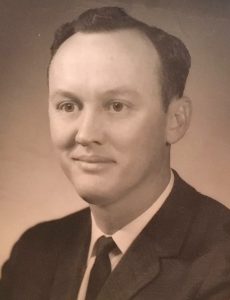 “I have need of silence and of stars.” Wm. Alexander Percy

“Perhaps they are not stars, but openings in heaven where the love of our lost ones shines down.” Eskimo legend

“When he shall die, take him and cut him out into little stars, and he shall make the face of heaven so fine that all the world will be in love with night and pay no worship to the garish sun.” Wm. Shakespeare

Halbert (Hal) Marshall passed away peacefully on July 27, 2018 to be reunited with all the saints before him including his beloved wife, Dorothy.

Growing up in Alexander County, he graduated from Hiddenite High School in 1949, then immediately joined the U.S. Army where he served with distinction during the Korean War. He lost many friends and fellow infantrymen fighting in the cold peninsular winters. Due to prolonged exposure to the elements, he was hospitalized for two months in Japan following the conflict. Recovering, he continued to serve his country in peace time.

Returning home following his military experience, he attended Clevenger Business College. He soon met and married Dorothy (Dot) Bowers and moved to Forsyth County where he worked for Home Beneficial Life Insurance Company. Hal and Dot settled in Kernersville where they raised their two sons. Hal also grew his garden there and could be spied lovingly tending to it in full suit, tie, and wing-tip. An avid tomato grower, everyone loved his transcendent German Johnson Heirlooms.

After retirement in 1985, Hal and Dot enjoyed antiquing with their longtime friends, Edwin and Lavetta Craft. Always the hard worker, loving husband, father, and friend, Hal’s most lasting message to others was that it’s the small things in life that matter most, like sharing fresh produce with neighbors or gazing the November evening stars.

A modest man, Hal amassed a great wealth of love and affection from those he touched. Though reserved and unassuming, his spirit bloomed on the dance floor where he could indeed cut the proverbial rug.

He is survived by his loving sister, Mary Helen Lackey of Hiddenite; and son, William Jeffery Marshall of Lewisville; as well as close friend, Vogen Mark Everhart. Many will deeply miss Halbert and many will miss his heirloom beauties.

The family is deeply grateful to The Crest of Clemmons’ staff who lovingly cared for Halbert.

Both Halbert and Dorothy will be interred with military honors at the Arlington National Cemetery this November beneath the autumn stars and after summer’s garish sun.

Condolences may be sent to Affordablecremationswsnc.com.