RALEIGH – NC State head softball coach Jennifer Patrick-Swift completed her staff on Friday with the addition of Chelsea Wilkinson.   Wilkinson, a former standout at Georgia (2013-16), will serve as the program’s pitching coach. She comes to Raleigh after a one-year stint at South Carolina as a graduate assistant, helping the Gamecocks clinch their first NCAA Super Regional appearance since 2007. 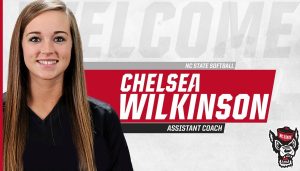 “Chelsea knows what it takes to get to Oklahoma City as a pitcher and that’s our goal, to finish each season there,” said Patrick-Swift. “She spent last year as part of a great coaching staff at South Carolina, and we have a lot of respect for what they do down there.

“She’s a homegrown product who was named North Carolina Player of the Year twice. I could feel her excitement about coming home and taking our pitching staff to the top of the ACC.   “In this process we were looking for the right fit and Chelsea absolutely checked all the boxes.”

A Taylorsville, N.C., native, Wilkinson finished her collegiate career among the top three of Georgia’s record books in seven pitching categories, and ranks seventh overall in Bulldog history with a 2.28 earned-run average. She completed her career with 97 wins to rank second all-time among the program, as she threw 35.5 shutouts including eight no-hitters and three perfect games.

“I’m so excited to be joining the Wolfpack family,” said Wilkinson. “I’m honored to become part of such an admirable softball program and university. I would like to thank the administration, as well as Coach Patrick-Swift, for this incredible opportunity. I’m eager to take the field with this tremendous coaching staff and group of student-athletes.”

As a senior, Wilkinson led her team to the Women’s College World Series and was the 14th overall pick in the 2016 National Pro Fastpitch Draft. She collected All-SEC honors in each of her four years, garnered All-Region honors in her final three seasons and as a sophomore was named the SEC Tournament MVP and a Second Team All-American.