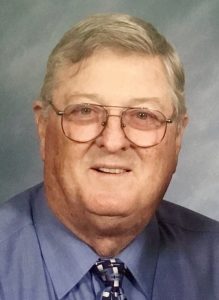 Edwin Gail “Squirrel” Thomas passed on to Heaven on Sunday, July 29, 2018 after months of declining health.

He was preceded in his death by his parents; his brother, Raeford Thomas; grandson, TJ Prevette; brother-in-law, Hugh Simpson; and sister-in-law, Faye Spicer.

After graduating Hiddenite High School, Squirrel attended Gardner Webb College. After two years of college, he was drafted to play for the Cincinnati Reds Baseball Team (minors). Just two years into baseball, he signed up for the US Army 1956-1958. All the while, playing baseball in the Army as well! Once his two years of Duty were done, his baseball career (Statesville Owls) continued landing him playing for the California Angels for a short stint until 1965.

After his success in baseball, he became well known as a scratch golfer playing in the minors 1970-1972. Squirrel was inducted to the Alexander County Hall of Fame in 2015 for his amazing athletic accomplishments in baseball, basketball, and golf.

He continued playing golf and married Betty (Betsy) McCoy in 1970. Golf still continued, but as a profession he became well known for AFLAC (American Family Life Assurance Co). He had a long career with them for 22 years.

His passion was raising a family, playing golf, and being a friend. His calling was being a witness for Christ with his wonderful Gospel singing and was very involved with Gideons International (28 years) handing out testaments and spreading God’s Word.

He loved and enjoyed fellowship with all of his church family and close friends throughout his entire life. Even in declining health and two strokes, he continued to sing and witness for Gideons and Diamond Hill Baptist Church. He touched many lives, even at 83, at the Elder Center of Statesville and Autumn Care of Statesville.

Online condolences can be made to the family at www.nicholsonfunerals.com and Nicholson Funeral Home is serving the family.